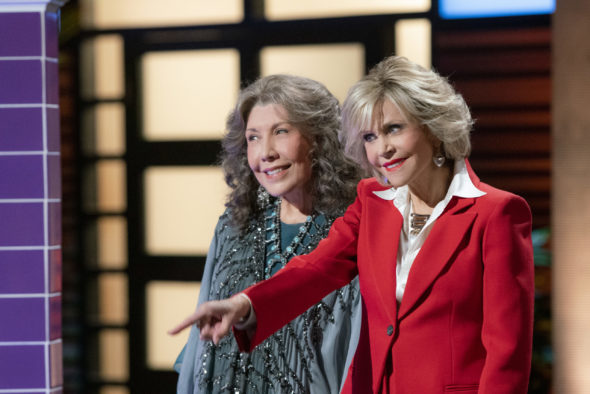 Grace and Frankie may soon have a full 9 to 5 reunion. Legendary singer Dolly Parton is hoping to join Jane Fonda and Lily Tomlin, her co-stars in the 9 to 5 comedy feature film, on the Netflix comedy series.

Grace and Frankie follows unlikely best friends (Fonda and Tomlin) as they explore life after they find out that their husbands (Martin Sheen and Sam Waterston) are gay and in love with each other.

ET Canada shared the following comments made by Parton during a recent virtual event:

“I have been trying to do Grace and Frankie for years. We worked so well on ‘9 To 5’ and it’s a crazy wonderful show. We have been trying to write me in somehow so when it is safe to actually do a production, I will probably get around to doing that.”

The upcoming final season of Grace and Frankie has seen its production delayed due to the pandemic. The age of the stars of the series is a concern, so the cast and crew of the Netflix series are waiting until it is safer for the four leads to begin filming.

What do you think? Are you a fan of Grace and Frankie on Netflix? Would you like to see Parton guest in the seventh and final season?

Love Frankie &Grace so sad it is the last series.

Yes! Love this show! Sad that it’s the final season.

Hope it will continue..the show is so good + finally has real older actors in it that protest topics of life. Great cast

Yes to more episodes of the show. We love it. Yes to Dolly Parton.

Yes, please I agree 100% please bring more episodes out and seeing Dolly on that show too I think would be great! I love the show patiently waiting!