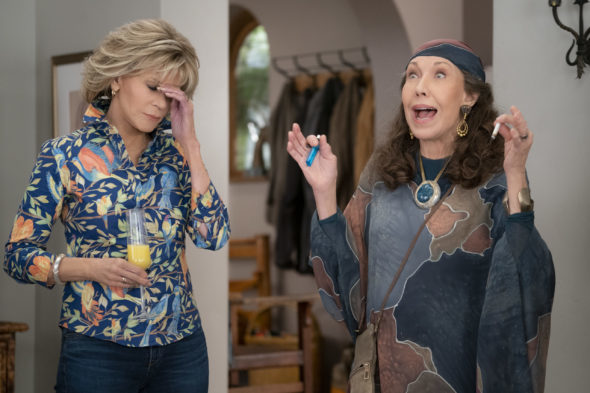 Get a new look at season six of Grace and Frankie. Frankie will have to deal with something big during the upcoming season. The new trailer, released by Netflix, shows Frankie toasting her best friend, Grace. She has just gotten married, and it is a surprise to all. Frankie will now have to cope with her partner-in-crime being a married woman. Will this change the pairs dynamic? Fans will need to tune in to find out.

Grace and Frankie is headed towards it end. Per Deadline, production on the final season of the series will begin soon, and it will likely air in 2021. An actual premiere date for season seven of the Netflix has not been announced.

Season six of Grace and Frankie will arrive on January 15. Check out the new trailer below.

What do you think? Are you excited for the return of Grace and Frankie? Will you watch the new season?

This 73 year old Grandma loves every season of “Grace & Frankie” & looking forward to the last – altho wish it could go on & on!

I love grace and frankie

Yes! I love “Grace & Frankie” with all the subplots & the fabulous relationships! The dynamic synergy between Jane Fonda & Lily Tomlin is marvelous to behold. And the supporting characters are top-notch
actors as well! Love it!!!

I love this show and do not want it to end! Please Netflix do not cancel. Lily Tomlin and Jane Fonda are great and are very entertaining! I love them both.