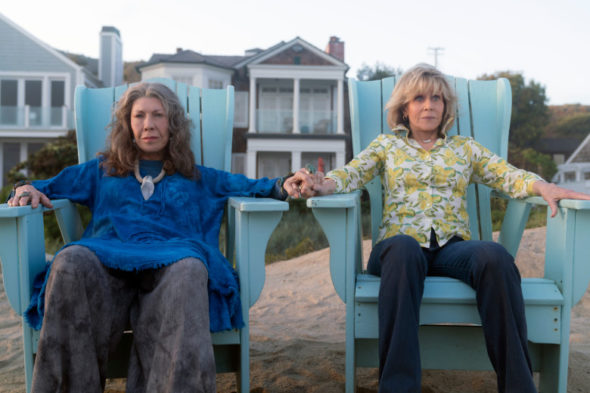 Good news for Grace and Frankie fans! According to SpoilerTV, Netflix has renewed the TV show for a sixth season.

Although Netflix has not announced an official renewal for Grace and Frankie, SpoilerTV says the comedy will begin shooting its sixth season in December.

Season five is slated to premiere in 2019.

What do you think? Are you a fan of Grace and Frankie? Are you excited for the upcoming seasons?

I love Grace and Frankie,. I think it’s the best series on TV right now.
I watched Lily way back when she played the telephone opperator: with two ringy dingies.
And she is a great Frankie character. Jane is Jane,, what can I say.
Please keep this series going for at lest a couple more seasons.

Looking forward to a 6th season of Grace & Frankie…. I really enjoyed the first 5…

I cant believe BB would do that to Hope . Make me mad when the right thing is not done . This can hurt someone that this has really happened to . Do the right thing give her Beth back . Thank you

I absolutely adore and love grace and Frankie! They are the dynamo duo! Just as I loved them watching 9-5 when I was teenager. The cast are spectacular! Please don’t leave me hanging. Now that grace got married to Nick I’m worried about Frankie! Grace and Frankie is a show that I enjoyed tremendously!! It helped me mentally as well recovery from a bad motor vehicle accident. It was the only thing that I looked forward to ever day! Love all of writer actors and actresses especially Lilly Tomlinson and of course Jane Fonda