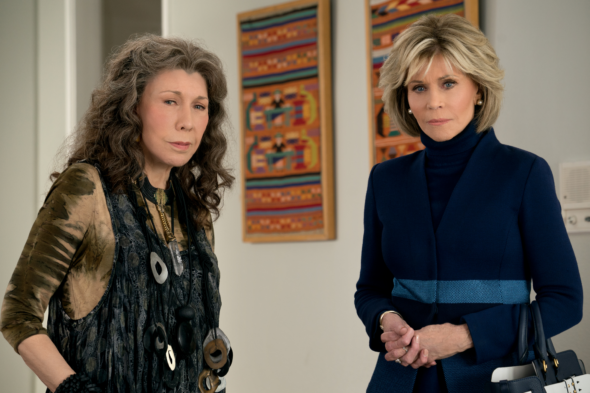 It looks like Grace and Frankie is coming to an end. Netflix just announced the TV show has been renewed for a seventh and final season.

Season six of Grace and Frankie premieres on Netflix in January 2020. Check out the announcement below:

Also, the series has been renewed for a seventh and final season, which will make it the longest-running Netflix original series ever with 94 episodes. pic.twitter.com/lmZrXhBrj8

What do you think? Do you watch Grace and Frankie? Are you excited for the new season?

I hate reading they’re canceling this great acting, great storylines & just a great experience. Why why, why WRONG DECISION!!!

I love this show! It makes aging bearable!

I am so glad they are having a season 7….this show is so good that I can’t believe they are ending it….please keep it going longer!!!

We watch this show religiously. Glad to see it’s going to get a season 7.

I absolutely LOVE this show & am SO disappointed to learn season 7 is the last! I thought the show was really a class act with these outstanding actors. I binged watched a whole season in one day cause I just couldn’t turn it off. Lol…

This is my FAVORITE show!!!

Love the show. although don’t think the men (husbands) were believable enough. It is good light hearted and easy to watch.

Absolutely loved grace & frankie, great ensemble cast. Very funny & totally relevant for people above a certain age- am so sorry to see it go- was a classic! Thank you, thank you to all involved!!

I love watching Grace and Frankie! I wish it would continue for many seasons to come. The friendship between Grace and Frankie is so real. It reminds me of my friendship with two of my very close friends that has lasted for 57 years! We are all 65 now & I have been very close friends with these two since third grade! We remain close even though not in where we live. I live in Long Beach, CA, Gail lives in North Bend, Oregon and Melody lives in Cottonwood, Arizona. Please renew this show for another season!

Yes waiting with great anticipation!
Love them both – great humor – so real
Love the conversations- great cast everyone brings it, always Miss You!!

This show is Great! These women are me. Don’t cancel it!

I love this show. Laughter is good and needed in these times.