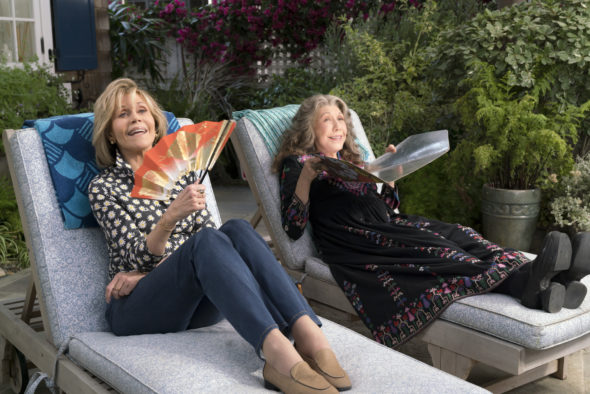 A Netflix comedy TV series, Grace and Frankie stars Jane Fonda, Lily Tomlin, Martin Sheen, Sam Waterston, June Diane Raphael, Baron Vaughn, Brooklyn Decker, and Ethan Embry. Retired businesswoman Grace (Fonda) and hippy artist Frankie (Tomlin) had their lives upended, when their divorce-lawyer husbands, Robert Hanson (Sheen) and Sol Bergsetin (Waterston), revealed they are in love with each other. At first the women moved in together as a stop-gap, but as their bond solidified, they and their exes found a way to form a new kind of family.

They’re back, and out of f*cks to give.

About Grace and Frankie:

In Grace and Frankie, Jane Fonda (“Grace”) and Lily Tomlin (“Frankie”) star as two women whose lives are turned upside down when their husbands reveal they are gay and leave them for each other. Both sparring partners and partners-in-crime, Grace and Frankie form an unlikely and unbreakable bond and face their uncertain futures head-on, hand-in-hand. Together with their ex-husbands and children, they discover the true definition of “family,” with laughter, tears and plenty of mood enhancers along the way.

What do you think? Have you watched the first four seasons of the Grace and Frankie TV series? Do you plan to check out season five on Netflix? Let us know below.

Oh, I’m so glad! We’ve been looking for it for months already. This is the show that really got us hooked on the entire concept of Netflix in the first place. Yeah!