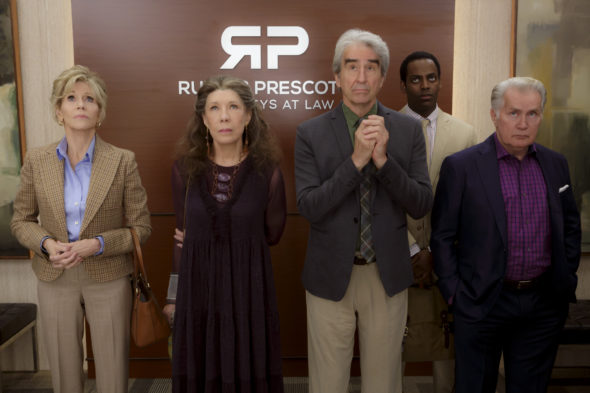 TV show description:
A comedy from creators Marta Kauffman and Howard J. Morris, the Grace and Frankie TV show centers on retired beauty business mogul Grace Hanson (Fonda) and Frances Mengela Bergstein (Tomlin), i.e. Frankie — a free-spirited artist. Although they’ve never been particularly close, Grace and Frankie have been involved in each other’s lives for a long time, thanks to their divorce-lawyer husbands, Robert Hanson (Sheen) and Sol Bergsetin (Waterston), who are in practice together.

One evening, the couples meet for dinner. Arriving at the restaurant before their husbands, Grace and Frankie speculate that “the boys” are going to announce their retirement. Instead, they reveal a second longtime partnership of a more personal and enduring nature.

Robert and Sol have been in love for decades. Now they want to divorce their wives, so that they can finally marry each other. Grace and Frankie are shocked, to say the least, and do not take the news well.

Next, the couples have to break the news to their adult children. While Frankie and Sol tell their sons, Bud (Vaughn) and Coyote (Embry), Robert and Grace lay out the truth for their daughters, Brianna (Raphael) and Mallory (Decker).

Although shocked, the kids try to comfort their mothers as best they can. Still, both Grace and Frankie eventually decamp to their families’ shared beach house, which also served as the men’s love next.

While the women have never had much in common, they wind up moving in together, at least until they find their footing. As their bond solidifies, Grace and Frankie form a new sort of family, replete with laughter, tears, ice cream, booze, and plenty of other “mood enhancers,” to smooth their uncharted, sometimes rocky path.

Series Finale:
Episode #94
This episode has not aired yet.
First aired: TBD

What do you think? Do you like the Grace and Frankie TV series? Should this TV show be ending or be renewed for an eighth season on Netflix?

It should be renewed. Great show for old and young adults!! Renew please.

Should be renewed!! One of Netflix BEST series!

This absolutely should be renewed. There aren’t enough shows with older people. Especially ones as talented as this group.

My bff and love the show and can relate. She is frankie and am grace. I would love to see more seasons. Dont want it to end. I look forward to getting off work and watch and episode or two. We even love watching past seasons. Love the show

One of the best shows for us older folks…all the actors are really good….wish they wouldn’t end. I’m sure they could think of many more story lines.

LOVE THIS SHOW. Always looked forward to it coming on and hated that the series had to end at the end of each season. Very sad knowing there’ll be no more.

Please keep this show going. I love, love, love it. It addresses so many modern issues from the perspective of the older person and does so with great humor and pathos.. So many of us in the 3rd stage of our lives can really relate to the characters in the show. Sooooo looking forward to more episodes. I have watched up to Season 5 on Netflix. How can I get more episodes?

Oh please please please keep Grace and Frankie going !!!!! This show is funny entertaining and sooooo refreshing especially for us women who aren’t teenagers or the “younger” crowd !!! PLEASE WE DON’T HAVE MANY SHOWS FOR US !!! The cast is perfect and the premise so on target !!!!

This show should not be cancelled. It is cleverly written and well-acted.

Please keep Grace and Frankie on extra seasons. This is a great show. I have watched all the season on Netflix up to season 6. I would like to see 8,9,10. Why is this being canceled?