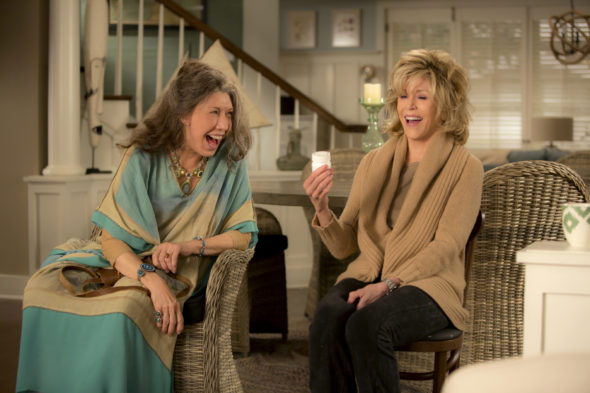 Get your funny bone ready. Netflix has announced the fourth season of its Grace and Frankie TV show will premiere on Friday, January 19, 2018. Watch a preview for season four of the comedy, below.

From creators Marta Kauffman and Howard J. Morris, Grace and Frankie stars Jane Fonda and Lily Tomlin as Grace Hanson and Frankie Bergstein, two women who find themselves starting all over, after learning their husbands are in love with each other. The Netflix cast also includes Martin Sheen, Sam Waterston, June Diane Raphael, Baron Vaughn, Brooklyn Decker, and Etham Embry. Friends alum, Lisa Kudrow, is guest starring in season four.

Grace and Frankie Season Four Drops to Netflix in January


Don't mess with the best. We're back January 19th. pic.twitter.com/xTb5mXVF8p

About Grace and Frankie:

In Grace and Frankie, Jane Fonda (“Grace”) and Lily Tomlin (“Frankie”) star as two women whose lives are turned upside down when their husbands reveal they are gay and leave them for each other. Both sparring partners and partners-in-crime, Grace and Frankie form an unlikely and unbreakable bond and face their uncertain futures head-on, hand-in-hand. Together with their ex-husbands and children, they discover the true definition of “family,” with laughter, tears, and plenty of mood enhancers along the way.

What do you think? Are you a fan of the Grace and Frankie TV series? Do you plan to stream the fourth season, when it drops to Netflix in January? Let us know, below.

Love the show but they need to stop taking the Lords name in vain its unnecessary and offends many, especially God!

I don’t like how the actors and actresses say Jesus this or Jesus Christ that constantly on their show. Devout Christians all over the world have the deepest reverence for the name Jesus. One does not use His name in a flippant manner. One of the Ten Commandments is thou shalt not take the Lord thy God’s name in vain. I don’t know who the script writers are for the series Grace and Frankie but there are many other words in the English language they can use to get their points across. I would like them to use their own… Read more »

Absolutely love Grace & Frankie! I stream all the episodes in one sitting. I am a senior so I appreciate the situations in this comedy. I laugh so hard I cry! Please continue making this show. I have marked my calendar for Jan. 19th