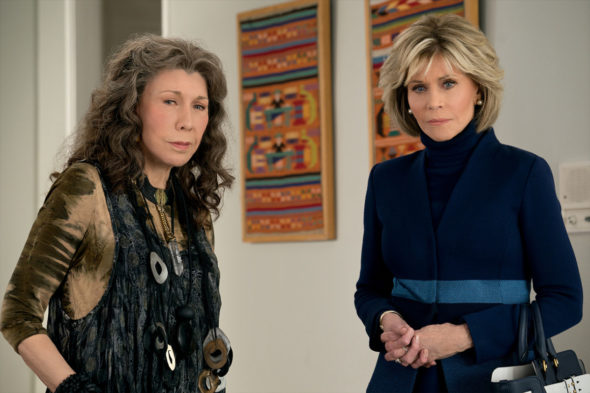 Season five of Grace and Frankie debuts on Netflix on January 18th. Season six is expected to debut in 2020.

What do you think? Are you a fan of Grace and Frankie? Are you glad it will continue?

Long live Grace and Frankie! Love, love, love the show! I have not owned a TV for the past 20 years, since relocating from No. Cal. to Portland, OR. So am really happy it is streaming on Netflix! Keep • doing • that! PLEASE!!

We love this show! Jane Fonda & Lilly Tomlinson are absolutely the perfect duo in this poignant & comedic setting. We love the fact that female actors in their 70’s can play relevant roles. The featuring of different family structures is relevant & enlightening for generations of all ages.

We’re really excited G &F is returning for a 6th season. The first 5 were well-written and performed by a cast of awesome actors. Hooray!

Please please please continue with the next season. As a soon to be 77 year old woman, I wince at the indication of memory loss or confusion in some of its characters -all too close to my situation – but it is done with humor and compassion. I’m sure that no matter the condition – whether physical or mental – this reaches a huge elderly viewing audience. But the dialogue written for the younger cast members, especially Briana, is brilliant and must appeal to viewers of all ages. I share a home with another woman in a similar platonic but… Read more »

I am thrilled another season is coming; I have laughed so much as I’ve followed this show since its beginning:)

Love, love this show! I must admit I never get tired watching reruns! So Happy for more!

Love the show. Anytime I mention the show I’ve heard totally positive responses. Some folks have really surprised me when they admitted how much they love it, too.

I love it! I’ve loved it from day 1, and have told everybody I know (although in all fairness, I don’t know many people)! The ladies with their badinage, June as that sexy, feisty little firecracker she plays so well, the guys’ charachters are so adorable with each other, and the rest of the supporting cast fit so perfectly into their roles. I’m very excited it will continue for at least a couple more seasons!