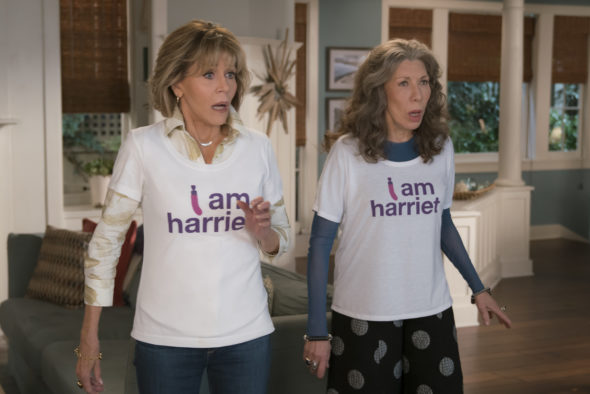 A Netflix comedy TV series, Grace and Frankie stars Jane Fonda, Lily Tomlin, Martin Sheen, Sam Waterston, June Diane Raphael, Baron Vaughn, Brooklyn Decker, and Ethan Embry. Retired businesswoman Grace Hanson (Fonda) and hippy artist Frankie Bergstein (Tomlin) have their lives upended, when their divorce-lawyer husbands, Robert Hanson (Sheen) and Sol Bergstein (Waterston), reveal they are in love and want to marry each other. While the women have never had much in common, they wind up moving in together, at least until they find their footing. As their bond solidifies, Grace and Frankie form a new sort of family, replete with laughter, tears, ice cream, booze, and plenty of other “mood enhancers,” to smooth their uncharted, sometimes rocky path.

Unless they decide to publicize viewership stats, it is hard to predict whether Netflix will cancel or renew Grace and Frankie for season five. Flying blind, I expect it to get at least one more renewal and a proper sendoff, based on the marquee value of the cast, alone. That’s just speculation though, so I’ll stay on top of all the industry news and update this page with breaking developments. Subscribe for free alerts on Grace and Frankie cancellation or renewal news.
2/14/18 update: Netflix has renewed Grace and Frankie for a fifth season. Details here.

12/3/18 update: The fifth season of Grace and Frankie premieres on Netflix in January. Details here.

What do you think? Are you glad that the Grace and Frankie TV show was renewed for seasons five and six? How would you feel if Netflix had cancelled this TV series, instead?

Love this show. Could not stop watching episode after episode.

So happy !!! Looking forward to season 5 and many more seasons to follow . Hope the wait isn’t too long. Love love this show ! So happy !!

Love this show keep it going!!!

I love this show Gracie and Frankie!!’ ❤️❤️❤️ PLEASE KEEP IT COMING It’s so funny and entertaining The best I’ve seen in a very long time

Please renew- it’s the reason I subscribed to Netflix!

Please renew Grace and Frankie for season five immediately. This is the best show currently on television.

I Being a 65 yr old Flowerchild Irene can relate to sooooo much of life lived already through this show. I LOVE IT and WOULD LOVE MORE AS LONG AS IT DIDN’T HURT ANYONE’S HEALTH. FANTASTIC CAST,
WRITING, WARDROBE, ART, MUSIC , DECORATING, LILY’S JEWERLY ~ and BLOUSES OMG
HOPING FOR A FEW MORE SEASONS ,
LOVE YOU ALL !!!! PEACE ✌✌✌✌