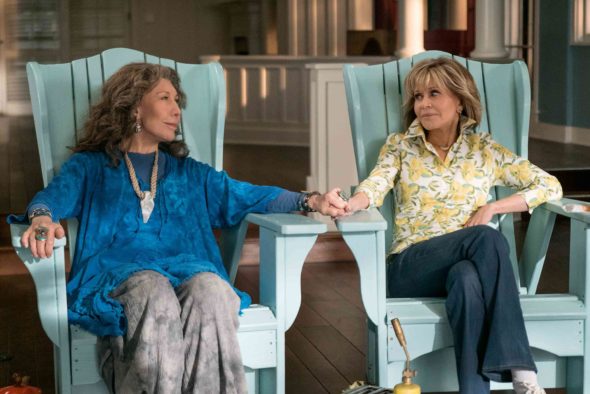 What’s ahead for these strong ladies? Has the Grace and Frankie TV show been cancelled or renewed for a seventh season on Netflix? The television vulture is watching all the latest cancellation and renewal news, so this page is the place to track the status of Grace and Frankie, season seven. Bookmark it, or subscribe for the latest updates. Remember, the television vulture is watching your shows. Are you?

Streaming on the Netflix subscription service, Grace and Frankie stars Jane Fonda, Lily Tomlin, Martin Sheen, Sam Waterston, June Diane Raphael, Baron Vaughn, Brooklyn Decker, and Ethan Embry. Retired businesswoman Grace Hanson (Fonda) and hippy artist Frankie Bergstein (Tomlin) have their lives upended, when their divorce-lawyer husbands, Robert Hanson (Sheen) and Sol Bergstein (Waterston), reveal they are in love and want to marry each other. While the women have never had much in common, they wind up moving in together, at least until they find their footing. As their bond solidifies, Grace and Frankie form a new sort of family, replete with laughter, tears, ice cream, booze, and plenty of other “mood enhancers,” to smooth their uncharted, sometimes rocky path. In season six, Grace’s announcement sparks big changes in her friendship with Frankie, while a new business idea keeps the women on their toes.

We don’t have to wonder about the fate of Grace and Frankie. Netflix has already renewed the series for a seventh and final season. I’ll update this page with breaking developments. Subscribe for free alerts on Grace and Frankie cancellation or renewal news.

What do you think? Are you glad that the Grace and Frankie TV show has been renewed for a seventh season? Do you think this Netflix series should be ending?

Show must go on!

The show is hilarious, touching, emotional, and sincere all at the same time. It has sass and class while delivering eccentric fun and laughter. It is sad to hear the show has been cancelled, but I am glad about there being a season 7. Can’t wait for it to be available on Netflix. Love this show!!!

Love it! Keep it going as long as the cast wants.