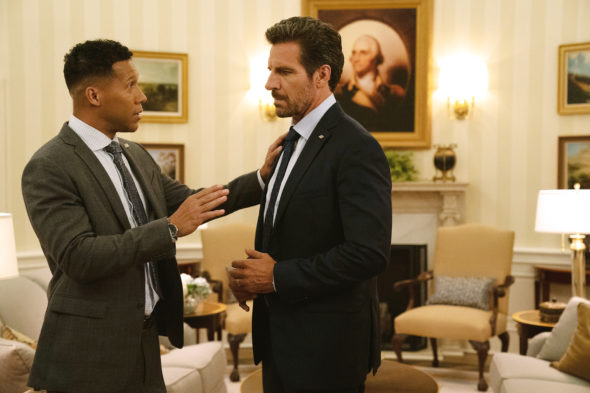 Who will survive the third season of the Tyler Perry’s The Oval TV show on BET? As we all know, the Nielsen ratings typically play a big role in determining whether a series like The Oval is cancelled or renewed for season four. Unfortunately, most of us do not live in Nielsen households. Because many viewers feel frustrated when their viewing habits and opinions aren’t considered, we invite you to rate all of the third season episodes of The Oval here.  *Status Update Below.

A BET primetime soap opera series, Tyler Perry’s The Oval stars Ed Quinn, Kron Moore, Javon Johnson, Ptosha Storey, Vaughn Hebron, Teesha Renee, Daniel Croix Henderson, Lodric D. Collins, Ciera Payton, Walter Fauntleroy, Taja V. Simpson, Brad Benedict, Travis Cure, Matthew Law, Bill Barrett, Derek A. Dixon, Nick Barrotta, Kaye Singleton, and Russell Thomas. The TV show begins as a new First Family moves into the White House. The series lifts the veil of what can happen when the leader of the free world, his wife, and family are crazed maniacs. The series also highlights the personal side and everyday lives of the staff who run the inner workings of the nation’s most iconic residence. Season three begins as the President and First Lady barely dodge death but continue in their ways. Hunter vows for revenge, Victoria has lustful eyes on Sam, and Jason is ready to finish the job someone else started: taking his mother out.

What do you think? Which season three episodes of the Tyler Perry’s The Oval TV series do you rate as wonderful, terrible, or somewhere between? Do you think that The Oval should be cancelled or renewed for a fourth season on BET? Don’t forget to vote, and share your thoughts, below.

*3/23/22 update: Tyler Perry’s The Oval has been renewed for a fourth season on BET.

My favorite show just love this show a lot

The Oval has too much going on and only a little of it makes any sense at all. For my household, it is hard to watch and it is too boring to hold anyone’s attention.
I would love to see it continue only if the writing gets better and narrow down some of the scenes. Take out some of the scenes that do not relate to anything.

Wrap up The Oval in season 4 and move along with Ruthless and give us a season 3 there!!

They should be renewed for season four

No longer appealing. Time to conclude.

Yea, but i just want Victoria caught and get the electric chair where everyone can see. The president get put in a jail like the one Olivia was in. The one in jail bleeds to death. The top guy has a stroke where he only has use of his left hand and in wheel chair because he can’t walk His wife has a nervous breakdown. And before Victoria get the chair her son walks in the viewing room. She thought she had killed him. But his dad figured Victoria was going to do something drastic so he had him moved.… Read more »