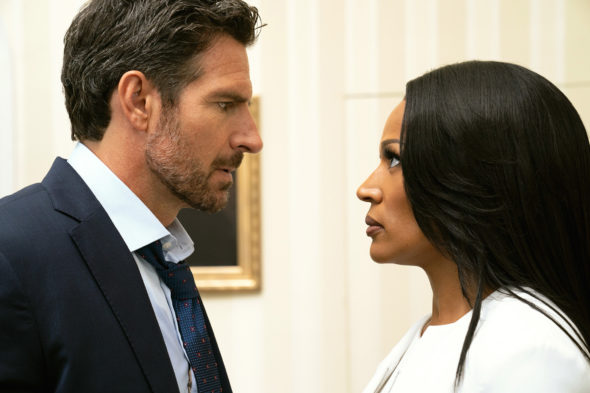 When will it be time for this series to leave office? Has The Oval TV show been cancelled or renewed for a fourth season on BET? The television vulture is watching all the latest cancellation and renewal news, so this page is the place to track the status of The Oval, season four. Bookmark it, or subscribe for the latest updates. Remember, the television vulture is watching your shows. Are you?

Airing on the BET cable channel, Tyler Perry’s The Oval stars Ed Quinn, Kron Moore, Javon Johnson, Ptosha Storey, Vaughn Hebron, Teesha Renee, Daniel Croix Henderson, Lodric D. Collins, Ciera Payton, Walter Fauntleroy, Taja V. Simpson, Brad Benedict, Travis Cure, Matthew Law, Bill Barrett, Derek A. Dixon, Nick Barrotta, Kaye Singleton, and Russell Thomas. The TV show begins as a new First Family moves into the White House. The series lifts the veil of what can happen when the leader of the free world, his wife, and family are crazed maniacs. The series also highlights the personal side and everyday lives of the staff who run the inner workings of the nation’s most iconic residence. Season three begins as the President and First Lady barely dodge death but continue in their ways. Hunter vows for revenge, Victoria has lustful eyes on Sam, and Jason is ready to finish the job someone else started: taking his mother out.

The third season of Tyler Perry’s The Oval averaged a 0.19 rating in the 18-49 demographic and 932,000 viewers in the live+same day ratings (includes all DVR playback through 3:00 AM). Compared to season two, that’s down by 7% in the demo and up by 10% in viewership. While these numbers don’t include further delayed or streaming viewing, they are a very good indicator of how a show is performing, especially when compared to others on the same channel. There can be other economic factors involved in a show’s fate, but the higher-rated series are usually renewed and the lower-rated ones are cancelled. Find out how The Oval stacks up against other BET TV shows.

Will BET cancel or renew Tyler Perry’s The Oval for season four? This outrageous drama series continues to be very popular for the cable channel so I have no doubt that it will be renewed. I’ll update this page with breaking developments. Subscribe for free alerts on The Oval cancellation or renewal news.

3/23/22 update: Tyler Perry’s The Oval has been renewed for a fourth season.

What do you think? Are you glad that the Tyler Perry’s The Oval TV show has been renewed for a fourth season? How would you feel if BET had cancelled this TV series, instead?

The Oval is very entertaining and exciting. I’m very glad it’s up for a fourth season. I’m looking forward to a tenth season if possible. I hope Mr. Perry work hard on getting it to the tenth season. Let’s see how after getting those too crazy out of the white house, how the news president and his wife and staff get things done. Or will they become just as corrupt? Looking forward to the new seasons.

I Can’t wait for Season 4 of the OVAL
To Return .

I would have been highly pissed.

My husband and I love The Oval and watched every episode. We can’t wait for season 4 to start.

My fiance n I can’t wait for every Tuesday to watch the Oval. We are so glad that they decided to go forward with season 4

It’s one of the best evening series currently on television. I hope it returns, however, I’m thinking it’s going to be hard to come up with a story line due to the way it appears it’s going to end.

I think this should be the ladt season. I have had enough. Every time i wTch it i hope its the last one.

I hope that the oval is not canceled but it is not is good this season as it goes on. I hope that season 4 will pick up. It’s just that the fighting is fake and the vice president is reading a card for the lines. I can do that better than him. I love Tyler movies and shows but I hate to say that it needs to be more realistic.

The oval had me stuck infront of my tv, hope there will be a season 4

Yes, it is the craziest night of the week. I just don’t know how much more evil the president and his wife can do. We watch it every week. Tyler Perry is a genuis

Can someone tell me what’s the difference between Tyler Perry’s The Oval and Tyler Perry’s Too Close to Home that he had on TLC??? I’m asking to find out if it’s worth the time to play catch up or is it the same story plot other than in The Oval there are more black characters.