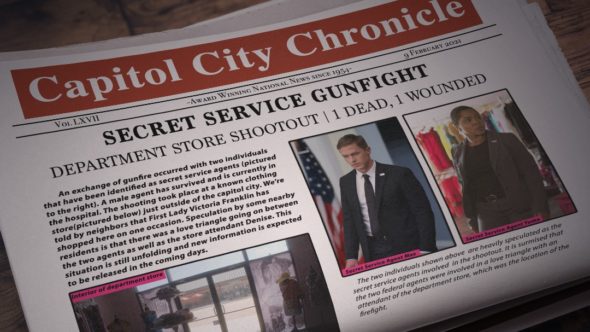 How crazy can this White House get? Has The Oval TV show been cancelled or renewed for a third season on BET? The television vulture is watching all the latest cancellation and renewal news, so this page is the place to track the status of Tyler Perry’s The Oval, season three. Bookmark it, or subscribe for the latest updates. Remember, the television vulture is watching your shows. Are you?

Airing on the BET cable channel, Tyler Perry’s The Oval stars Ed Quinn, Kron Moore, Paige Hurd, Daniel Croix Henderson, Javon Johnson, Ptosha Storey, Vaughn Hebron, Teesha Renee, Lodric Collins, Ciera Payton, Taja V. Simpson, Walter Fauntleroy, Brad Benedict, Travis Cure, Matthew Law, Bill Barrett, and Derek A. Dixon. The TV show begins as a new First Family moves into the White House. The series lifts the veil of what can happen when the leader of the free world, his wife, and family are crazed maniacs. The series also highlights the personal side and everyday lives of the staff who run the inner workings of the nation’s most iconic residence.

The second season of Tyler Perry’s The Oval averaged a 0.20 rating in the 18-49 demographic and 851,000 viewers. Compared to season one, that’s down by 19% in the demo and down by 12% in viewership. Find out how The Oval stacks up against other BET TV shows.

Will BET cancel or renew The Oval for season three? The series has been very popular for the cable channel and its inspired a spin-off series, Ruthless, on BET+. I’m confident that it will be renewed. I’ll update this page with breaking developments. Subscribe for free alerts on The Oval cancellation or renewal news.

2/24/21 update: Tyler Perry’s The Oval has been renewed for season three.

What do you think? Are you glad that Tyler Perry’s The Oval has been renewed for a third season? How would you feel if BET had cancelled this TV series, instead?

I. I love the Tyler Perry BET shows.

Too much killing I think it should have been base on politics and what ever else goes on in the white house no killing we have enough going on in the world today IJS!