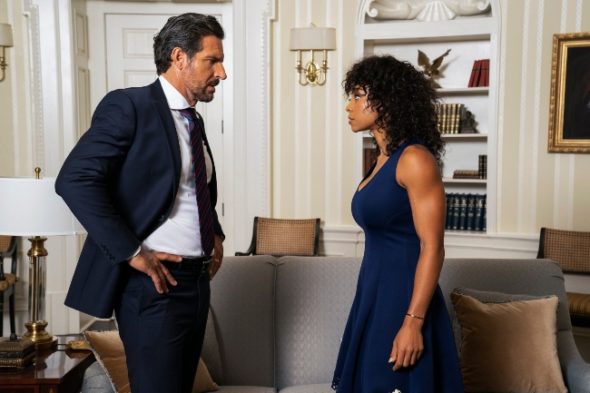 Tonight, BET aired the last episode of The Oval TV series — at least that viewers will see for a while. The show has already been renewed for a third season and there’s still more of season two to come.

The second season of Tyler Perry’s The Oval is averaging a 0.19 rating in the 18-49 demographic and 841,000 viewers in the live+same day ratings. Compared to season one, that’s down by 20% in the demo and down by 13% in viewership.

Season two of The Oval is comprised of 22 episodes and 13 of those have aired so far. The remaining nine installments will kick off on July 20th at 9:00 PM. A third season premiere date hasn’t been announced but a 2022 launch seems likely.

Thank you for watching the Season 2 midseason finale of Tyler Perry's The Oval with us.

What do you think? Do you like Tyler Perry’s The Oval TV series? Are you looking forward to watching the rest of season two and then season three on BET?

Where can I find season 2 episodes 1-13. This is addicting?

This show is shocking, but you just can’t stop watching it.
Tyler, I watch The Haves & the Have-nots & the Oval & you have a great imagination. Wild & Crazy & Shocking & Exciting !!! Keep on Keepin on. Your the best !!!

Excellent. Tyler Perry is brilliant in his creativity. I watch every show he creates. Thank you. Tyler The Oval is great. I wish the grandmother was still alive. I like how she was with the kids. I was hoping she was not really dead. That she told her husband to tell Victoria she was cremated so Victoria wouldn’t go to see her father. So the grandmother could surprise the grandson and scare the you know what out of him. Tyler thank you.

It was a show I could not stop watching. Wow! What an imagination. Can’t wait to see what is next. Also, want to know where the daughter is as we haven’t seen her since the plane scene! Waiting to see what Nancy’s husband does with the info!!!!! Also, haven’t seen some of the antics of the cult after Barry was abducted. Hurry with more information.