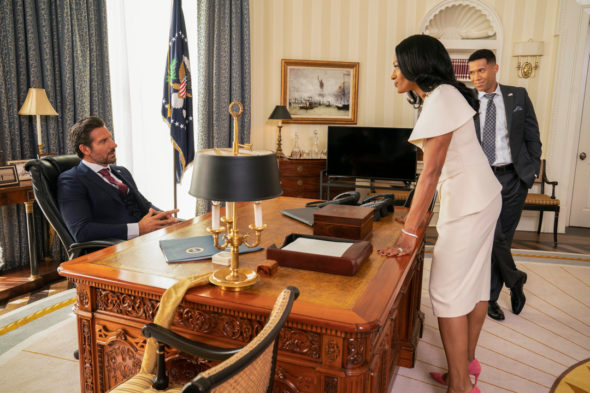 The Franklin family will return for more drama and another batch of episodes. BET has renewed The Oval TV series for a third season. Production on season three will begin later this year in Atlanta.

The second season of Tyler Perry’s The Oval, which debuted just last week, averages a 0.25 rating in the 18-49 demographic and 1.00 million viewers. Compared to season one, that’s up by 4% in the demo and up by 4% in overnight viewership. After tonight’s installment, there will be 20 more episodes left in season two.

Updated with the press release:

ON THE HEELS OF “TYLER PERRY’S THE OVAL” RATINGS SUCCESS AND EXPANSION OF ORIGINAL PROGRAMMING ON A NEW NIGHT, THE NETWORK GREENLIGHTS THIRD SEASON OF THE JUICY CAN’T-MISS DRAMA

New York, NY – February 23, 2021 – BET’s double-feature of Tyler Perry’s original programs strikes a ratings chord with viewers. 2.7 Million Total viewers P2+ tuned in during last Tuesday’s season premiere of “Tyler Perry’s Madea’s Farewell Play” and “Tyler Perry’s The Oval” (L3 simulcast across BET and BET Her on 2/16/21) with 1.2 and 1.4 Million Total viewers tuning in to BET alone respectively*. This season’s guilty pleasures, “Tyler Perry’s The Oval” is the #1 show for Black Viewers in ALL of Television 18-49, 25-54, and P2+ on its premiere night. Additionally, BET grew its audience versus L+SD double-digits +16% (“Madea’s Farewell Play”) and +50% (“The Oval” Episode #201).

On the heels of the ratings win, BET greenlights Season Three of “Tyler Perry’s The Oval,” slated to start production at Tyler Perry Studios in Atlanta later this year.

On tonight’s episode, “Natural Habitat” Episode #202 premiering at 9 PM ET/PT, Hunter questions Donald and Kyle about the aftermath of the shooting at Denise’s boutique. Gayle comes up with a plan of escape and shares it with Jason. Jason withholds information that could thwart Gayle’s plans.
BET has partnered with Community to launch an innovative text messaging campaign for “Tyler Perry’s The Oval,” where fans can enjoy a sneak peek of behind-the-scenes of the show, exclusive content and text directly with the cast. Text The Oval directly at (202) 918-3800 for the latest.

“Tyler Perry’s The Oval” is executive produced, directed, and written by Tyler Perry. Michelle Sneed will also serve as Executive Producer of the series for Tyler Perry Studios.

About “Tyler Perry’s Madea’s Farewell Play”
In Tyler Perry’s final stage run as Madea, he pulls together some of his audience’s favorite characters for a family gathering. Madea, Mr. Brown, Cora, and Aunt Bam are all under one roof for over two hours of pure joy. Madea is in rare form, as she tries to support her great-grandchildren, and daughter Cora. While at her granddaughter’s home, Madea uses her combination of tough love and old southern wisdom to help the family navigate their new normal. All seems fine until Mr. Brown takes a trip that leaves audiences in stitches. As always, Perry’s blend of incredible music and laugh out loud moments make the “Madea’s Farewell Play” great food for the soul.

“Tyler Perry’s Madea’s Farewell Play” is executive produced, directed, and written by Tyler Perry. Michelle Sneed and Mark E. Swinton will also serve as executive producers for Tyler Perry Studios.For more information, viewers can log on to BET.com and join the conversation on social media by using the hashtags #TheOvalOnBET and #FarewellMadea on all social platforms.

ABOUT BET
BET, a subsidiary of ViacomCBS Inc. (NASDAQ: VIACA, VIAC), is the nation’s leading provider of quality entertainment, music, news and public affairs television programming for the African-American audience. The primary BET channel is in 90 million households and can be seen in the United States, Canada, the Caribbean, the United Kingdom, sub-Saharan Africa and France. BET is the dominant African-American consumer brand with a diverse group of business extensions including BET.com, a leading Internet destination for Black entertainment, music, culture, and news; BET HER, a 24-hour entertainment network targeting the African-American Woman; BET Music Networks – BET Jams, BET Soul and BET Gospel; BET Home Entertainment; BET Live, BET’s growing festival business; BET Mobile, which provides ringtones, games and video content for wireless devices; and BET International, which operates BET around the globe.

What do you think? Do you enjoy watching The Oval TV series? Are you happy that the BET drama has been renewed for a third season?