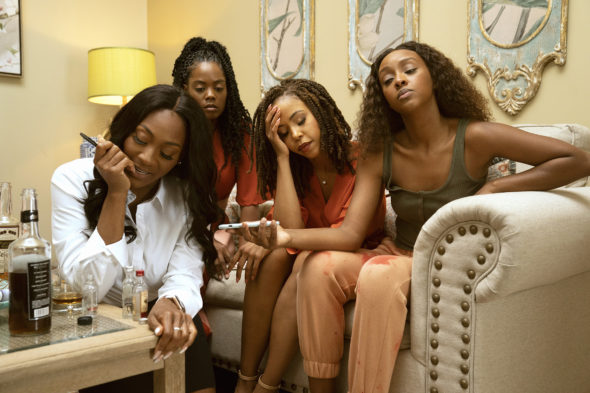 The ladies of the Tyler Perry’s Sistas TV series are sticking around on BET. The popular dramedy series is returning from its winter hiatus with additional season two episodes on Wednesday, January 27th. Today, it was announced that the show has been renewed for a third season which will begin filming later this month on Perry’s studio lot.

For two seasons, Tyler Perry’s original series “Sistas” has delivered with #1 rankings across the board. Highlights from both seasons of the fan-favorite series include:

About “Tyler Perry’s Sistas”
The one-hour drama follows a group of single black females as they navigate their “complicated love life,” careers and friendship through the ups-and-downs of living in a modern world of social media and unrealistic relationship goals. Tyler Perry takes viewers on an exhilarating ride of emotions and gut-busting predicaments that will test the ladies’ long-standing friendship. This band of women, intertwined with their newfound relationships, must navigate this new-age dating scene as they continue to search for love in their 30’s. The talented ensemble cast of “Tyler Perry’s Sistas” includes KJ Smith, Mignon, Ebony Obsidian, Novi Brown, Chido Nwokocha, DeVale Ellis, Brian Jordan Jr., Kevin A. Walton, Anthony Dalton II, Trinity Whiteside, and Crystal Renee’ Hayslett.

For more information, viewers can log on to BET.com and join the conversation on social media by using the hashtags #SistasOnBET on all social platforms.

ABOUT BET
BET, a subsidiary of ViacomCBS Inc. (NASDAQ: VIACA, VIAC), is the nation’s leading provider of quality entertainment, music, news and public affairs television programming for the African-American audience. The primary BET channel is in 90 million households and can be seen in the United States, Canada, the Caribbean, the United Kingdom, sub-Saharan Africa and France. BET is the dominant African-American consumer brand with a diverse group of business extensions including BET.com, a leading Internet destination for Black entertainment, music, culture, and news; BET HER, a 24-hour entertainment network targeting the African-American Woman; BET Music Networks – BET Jams, BET Soul and BET Gospel; BET Home Entertainment; BET Live, BET’s growing festival business; BET Mobile, which provides ringtones, games and video content for wireless devices; and BET International, which operates BET around the globe.

What do you think? Do you enjoy the Sistas TV show on BET? Will you be watching the rest of season two and the upcoming third season?

I laughed, was shocked and on the edge of my seat. Great for binge watching. Good for TP and the cast. Loved both seasons. Looking forward to season 3.

I love sisters and oval

I finally watched all episodes and fell in love while on the edge of my couch. It hit home and i saw myself along with so many ppl i kno relationships issues in just those four women lives. I mean the show is great hands down. Waiting for more!