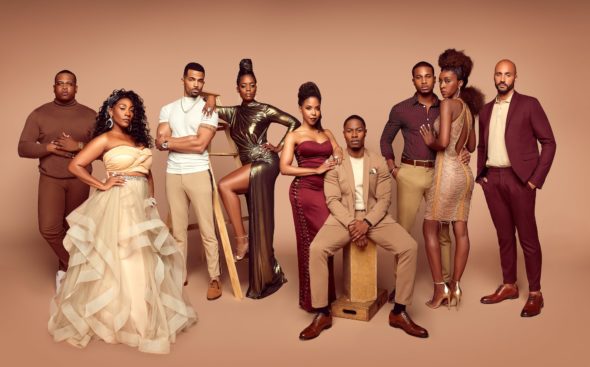 TV show description:
A soap opera, the Sistas TV show follows a group of single black females as they navigate complicated love lives, careers, and friendships, taking them on a roller coaster ride of emotions and humorous moments.

Andrea “Andi” Barnes (Smith) is a successful and confidant divorce lawyer who’s focused on taking her career to the next level. Gary Marshall Borders (Nwokocha) is the handsome and wealthy CEO of a Fortune 500 company. Although he’s married with kids, he longs to be with Andi.

Karen Mott (Obsidian) is street-smart and the owner of an up and coming hair salon. Zac (Ellis) is a working-class, blue-collar guy who works at the airport. He has high hopes and insecurity issues and has been Karen’s boyfriend of three years. Aaron Carter (Walton) has recently gone through a tough break up. He deals with heartbreak in an uncompromising way and is not very forgiving. Could he and Karen ever work?

Daniella “Danni” King (Von) marches to the beat of her own drum and doesn’t hold back. She’s an unbiased supporter of the group and works in customer service at the airport.

Reserved and a peacemaker, Sabrina Hollins (Brown) is also stylish and smart. She works as a bank teller and is intrigued when Calvin, one of her customers, asks her out. Successful, hard-working, and charming, Calvin Rodney (Dalton) is the owner of a real estate company. Maurice (Jordan) is also a bank teller, a supportive friend to Sabrina, and someone who’s also looking for love.

What do you think? Do you like the Sistas TV show on BET? Do you think it should be cancelled or renewed for another season?

Can’t wait for the next series, can’t be left in Suspense like this

I thak it ended ,strange
e

I LOVE SISTAS. I BEL AS A WOMAN, WE CAN ALL IDENTIFY WITH ONE OR MORE OF THE CHARACTERS. KEEP RENEWING THE SEASONS. DEFINITELY A WINNER!!!

I absolutely love this show but what kind of season finale was that?? No drama? No mystery? No suspense to lead to next season!! It just ended on sum musshy lifetime type stuff! Wtf? ‍♀️ I’ve personally come to expect way more interesting story lines!!

I love this show please dont stop this show

Renew please. I look forward to see Sistas every Wednesday. The show is really missed.

Renewed. I like the show. It started off kind of slow, but once you get to know the characters, it kind of grows on you. Need a second season to answer questions from the first season.

Renewed. I look forward to watching this show every Wednesday night. It’s a great, exciting show with real life drama.

Renewed of course… I anticipate each week with excitement to see what will happen next? Keep up the great work Mr. Tyler Perry.