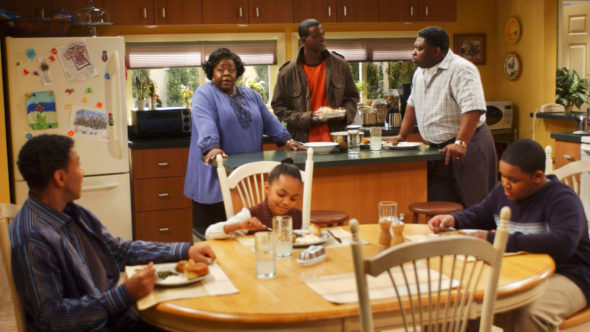 A family reunion is coming to BET. The cable channel has announced that it is reviving Tyler Perry’s House of Payne for a seventh season. The family comedy series debuted in 2006 as a syndicated series with 10 test episodes. A retooled version moved to TBS where it aired until 2012. The show racked up 254 installments (not counting the test episodes), making it the longest-running sitcom with a predominantly African-American cast.

In 2018, Perry revived some of the characters for a sequel series, The Paynes, on OWN. The 38 episodes finished airing in November 2018 and there’s been no word on the series’ fate. Now, with news of the House of Payne revival, it seems safe to assume that The Paynes won’t have a second season.

Per a video from Perry, the first new episode of House of Payne was written by Perry in October and is titled “Been a Long Time”. It will reportedly pick up five years after the end of the original series.

In addition to the House of Payne revival, BET has also announced that production on a new comedy series, Tyler Perry’s Assisted Living, is underway. Both series will air this summer.

NEW YORK – February 4, 2020 – BET Networks and Tyler Perry Studios announce the return of the hit series, “TYLER PERRY’S HOUSE OF PAYNE” which has begun production on its seventh season. The hilarious comedy about retired fire chief Curtis Payne (LaVan Davis) and his lovely wife Ella (Cassi Davis Patton) picks up five years later as they continue to navigate the problems of life with their quirky modern-day family. Production is also underway for the new sitcom, “TYLER PERRY’S ASSISTED LIVING.” After losing his job, Jeremy (Na’im Lynn), a patriarch of a young family with teenage children, decides to move to the backwoods of Georgia to help his crazy grandfather. Grandpa Vinny (J. Anthony Brown) has foolishly purchased a terribly run-down home for the elderly and he is in way over his head, but comedy ensues as Mr. Brown (David Mann) and Cora (Tamela Mann) show up at the right time as needy investors. Both series are set to premiere on BET in summer 2020.

ABOUT THE “TYLER PERRY’S HOUSE OF PAYNE” CAST:

LaVan Davis portrays Curtis Payne, the patriarch who is not afraid to speak his mind. Devoted husband to Ella and stern father to son, Calvin. He loves his family very much but prefers not to deal with them.

Cassi Davis Patton portrays Ella Payne the matriarch who has a kind heart and a great sense of humor. She loves caring for her family and knows how to keep Curtis in line.

Lance Gross portrays Calvin Payne the only child of Curtis and Ella. He is a devoted father to Calvin Jr. and Christian. Calvin has long struggled with finding his place but never lacks for trying.

Demetria McKinney portrays Janine Payne who is married to CJ and is the mother of their four children. Janine had a past history with drug addiction, but with the support of her family overcame great odds and got the help she needed.

China Anne McClain portrays Jazmine Payne, the daughter of CJ and Janine. Jazmine is the apple of her father’s eye. She has faced the challenges of growing up and going to college. She was known to have a sarcastic side and to employ sly plans to get what she wanted as a little girl.

Larramie “Doc” Shaw portrays Malik Payne the eldest son of CJ and Janine. He is smart but has unknowingly become a smaller version of his great-uncle Curtis.

Keshia Knight Pulliam portrays Miranda who is married to Calvin, but they have had marriage problems. She is the stepmom to Calvin Jr. and is the mother of baby Christian.

And Allen Payne as CJ Payne who is the nephew of Curtis and Ella, who raised him. He married his high school sweetheart, Janine and is the proud father of Malik, Jazmine, and twins Jayden and Hayden. CJ is the Fire Chief Commissioner.

David Mann plays Mr. Brown who reluctantly invests in a dilapidated assisted living facility. He agrees because he has deep-seated animosity towards Vinny, the current owner.

Tamela Mann plays Cora, Mr. Brown’s daughter who falls in love with the assisted living facility. She thinks it will be a good investment for herself and her father.

Na’im Lynn plays Jeremy who recently got laid off unexpectedly and travels to rural Georgia with his family to visit his grandfather.

Courtney Nichole plays Leah, Jeremy’s supportive wife. When she realizes that it may be Jeremy’s inheritance, she suggests that they stay in Georgia and fix up and run the assisted living building.

What do you think? Have you enjoyed episodes of House of Payne in the past? Will you check out the upcoming revival or Assisted Living on BET?

I watched House of Payne before and will definitely watch the movie e season. As a matter of fact I can’t wait. It reminds me so much of my family. It’s good to laugh especially now. GOD BLESS.