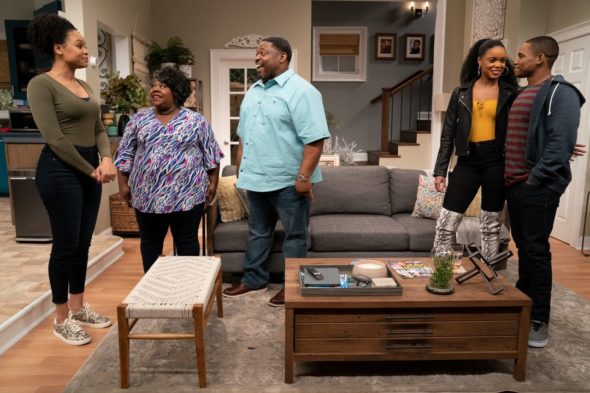 This popular family has been around since 2006 and Tyler Perry’s House of Payne ran for six seasons before being cancelled by TBS in 2012. A one-season spin-off, The Paynes, aired on OWN a couple of years ago. Now, House of Payne has been revived by BET? Will it be a hit in the ratings? Will the show be cancelled or renewed for season eight? Stay tuned.  *Status Update Below.

What do you think? Do you like the Tyler Perry’s House of Payne TV series on BET? Should it be cancelled or renewed for an eighth season?

*5/4/21 update: Tyler Perry’s House of Payne has been renewed through a ninth season.

HoP was never a great show (NEVER IMO LOL) but it did improve over time. But a problem that Tyler Perry has as a writer is that he drags scenes on for way too long. It’s even noticeable in other shows, like The Paynes, Love Thy Neighbor and Assisted Living, and it doesn’t help at all. The dialogue gets beaten like a dead horse sometimes, and it gives us more time to see how weak his writing is in general. He can go on all he wants about work ethic but that just means he has a lot of bad… Read more »

Funny show would love to see it be renewed but it needs some improvements: Get to the point and stop repeating themselves during one episode. What wrong with Uncle Curtis? Not enough Calvin. Too much of Malik’s girlfriend/baby mama.

The new house of Payne to me it is terrible because it take way to long to get to the point and the whole episode or episode’s is about 1 thing and that it. And Uncle Curtis is just mean and I know that he was kinda like that before but he use to joke around by being mean but to me now he is just a mean person for a example when Malik and Ella was locked out of the house the old Curtis would joke around about not opening the door and then he would open it but… Read more »

It’s good to see the old cast back together again.

I love the show. It’s funny and feel like the same mood of when the show was first produced.

Robert Hardeman
CJ son pregnant girlfriend mess up the show,she needs to be written out.
He was raised better in his role he has grown up with to have better

Love this show too funny it show. Can’t wait to watch it so good every episode.

I don’t really like this new show. It takes too long to make a point and Curtis is too silly, he never says anything serious or kind.

Too funny love it.

I love the show but it’s getting a bit boring. Is Curtis and Ella going to stay high the entire seasons. Come on writers you are more creative than this. You getting stale.

Love this show first season from couple years ago not same getting old tv show need to end. Never knew it was still on air use really funny. Love new show Assisted Living Tyler Perry after it super funny hope it get renewed another season.