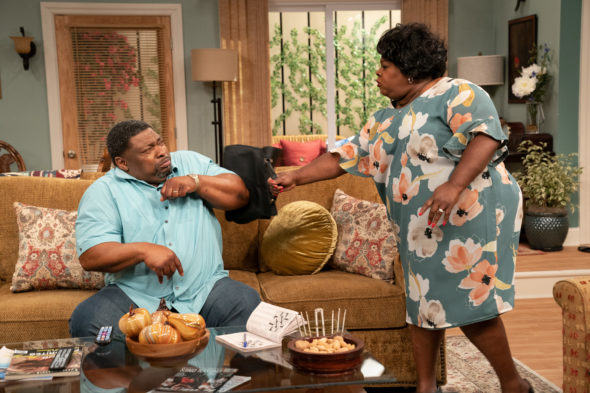 The Payne family isn’t going anywhere. Tyler Perry’s House of Payne has been renewed for both an eighth and a ninth season (the second and third seasons on BET). The cable channel also revealed that season eight will debut on Tuesday, May 25th, paired with season two of Tyler Perry’s Assisted Living (which as also been renewed for two years).

The seventh season of Tyler Perry’s House of Payne averaged a 0.22 rating in the 18-49 demographic and 844,000 viewers in the live+same day ratings. The 24 episode season aired between September 2020 and January 2021.

This popular family has been around since 2006 and the original Tyler Perry’s House of Payne ran for six seasons before being cancelled by TBS in 2012. A one-season spin-off, The Paynes, aired for 38 episodes on OWN in 2018.

What do you think? Have you been watching Tyler Perry’s House of Payne on BET? Are you looking forward to seasons eight and nine of this family sitcom?

Why would you leave us i. Suspense. Got my hopes in high gear and then drop it. Tyler Perry you have to bring more House of Payne and the Paynes. I love those shows, clean comedy for family viewing. You can’t just leave us like that.
Will they return for viewing, I can’t find them anywhere.

Love this show look forward to each episode.

love this show so funny look forward every episode enjoy it and love it. I can’t wait to watch both shows assisted living sitcom good cast too.

I’ve actually seen some of the newest season of House of Payne (like on demand), and I do feel that it’s alright. I never thought it got to the point where I could call it a great show. And it’s still not tbh. And like all of Tyler Perry’s shows, it has some of the same exact problems. Overlong storylines and scenes going on for too long, and repetitive dialogue. But it’s nice to have the cast back. I don’t think they need a two season renewal though because you don’t know how this show is going to perform and… Read more »