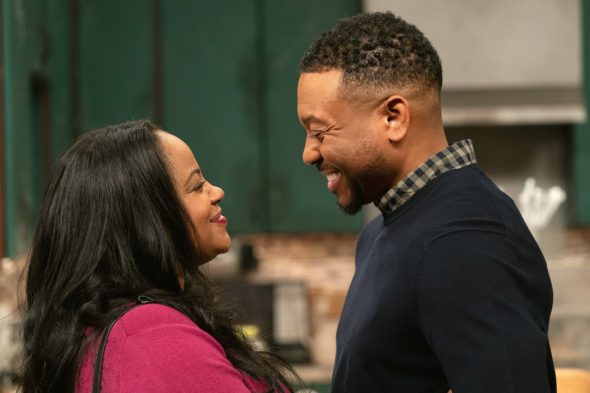 The Browns are staying in town. BET has renewed the Tyler Perry’s Assisted Living TV show for seasons two and three. The cable channel also revealed that season two will debut later this month, on Tuesday, May 25th. It will be paired with season eight of House of Payne (which has also been renewed for two seasons).

A family sitcom, Tyler Perry’s Assisted Living features the return of main characters from Tyler Perry’s Meet the Browns, which ran on TBS for five seasons. The new show stars David Mann, Tamela Mann, J. Anthony Brown, Na’im Lynn, Courtney Nichole, Tayler Buck, and Alex Henderson. In the story, Jeremy (Lynn) loses his job so he and his young family (Nichole, Buck, and Henderson) move to the backwoods of Georgia to help his eccentric grandfather. Jeremy’s Grandpa Vinny (Brown) has foolishly purchased a terribly run-down home for the elderly and he is in way over his head. Vinny’s prayers are answered (sort of) when Mr. Leroy S. Brown (David Mann) and his daughter, Cora (Tamela Mann) show up as needy investors.

The first season of Tyler Perry’s Assisted Living averaged a 0.21 rating in the 18-49 demographic and 832,000 viewers in the live+same day ratings. The 24 episode freshman season aired between September 2020 and January 2021.

What do you think? Have you watched the Tyler Perry’s Assisted Living TV show? Are you glad that it’s been renewed for seasons two and three?

Love this sitcom Tyler Perry so funny. I can’t wait to see both House of Payne. Never missed any episode last season enjoy it and love it.

I’m sorry but this show is honestly one of the worst shows I’ve seen in quite some time. I actually happen to like the show Meet the Browns even though it really is not a great show, but I I enjoyed it more than House of Payne and his other series, and I like David and Tamela Mann. But even seeing them back as these characters doesn’t do a thing to help this show because it’s just awful. It’s not funny (at least barely) and for what BET said was supposed to be a “family” show, they throw around the… Read more »