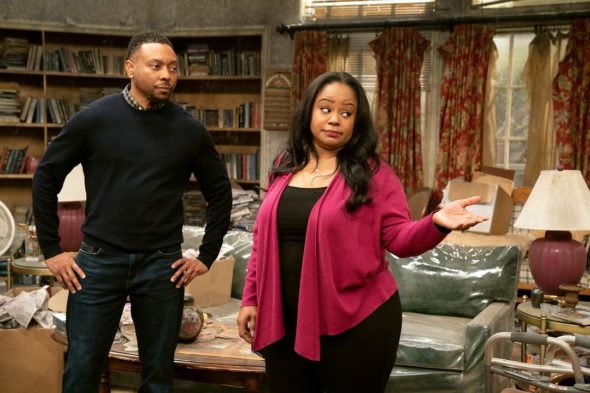 Assisted Living features the return of main characters from the Meet the Browns TV show which ran on TBS for five seasons. Will Tyler Perry’s Assisted Living have success in the ratings and last as long on BET? Will this new sitcom be cancelled or renewed for season two? Stay tuned.  *Status Update Below.

A family comedy series, Tyler Perry’s Assisted Living stars David Mann, Tamela Mann, J. Anthony Brown, Na’im Lynn, Courtney Nichole, Tayler Buck, and Alex Henderson. In the story, Jeremy (Lynn) loses his job so he and his young family (Nichole, Buck, and Henderson) move to the backwoods of Georgia to help his eccentric grandfather. Jeremy’s Grandpa Vinny (Brown) has foolishly purchased a terribly run-down home for the elderly and he is in way over his head. Vinny’s prayers are answered (sort of) when Mr. Leroy S. Brown (David Mann) and his daughter, Cora (Tamela Mann) show up as needy investors.

What do you think? Do you like the Tyler Perry’s Assisted Living TV series on BET? Should it be cancelled or renewed for a second season?

Always funny Tyler Perry love it best shows sitcom need little laughter in myself. Keep renewing it need to be.

Keep the show for season2

Show has improved since the 1st episode. J Anthony Brown & David Mann are so funny. Keep the show! 🙂

Hope ratings going up next week need to continue too funny love it.