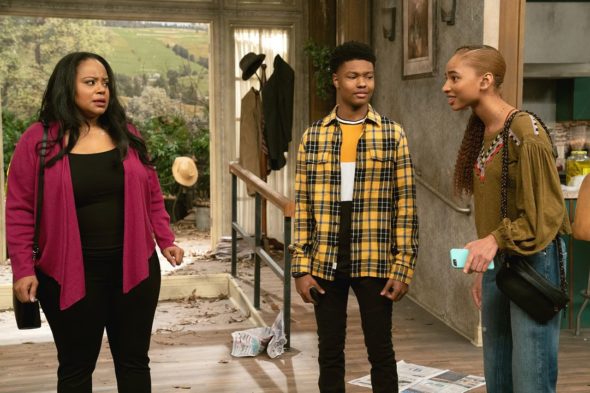 Have the Browns found a long-term home? Has the Tyler Perry’s Assisted Living TV show been cancelled or renewed for a second season on BET? The television vulture is watching all the latest cancellation and renewal news, so this page is the place to track the status of Tyler Perry’s Assisted Living, season two. Bookmark it, or subscribe for the latest updates. Remember, the television vulture is watching your shows. Are you?

Airing on the BET cable channel, Tyler Perry’s Assisted Living features the return of main characters from Tyler Perry’s Meet the Browns, which ran on TBS for five seasons. The new show stars David Mann, Tamela Mann, J. Anthony Brown, Na’im Lynn, Courtney Nichole, Tayler Buck, and Alex Henderson. In the story, Jeremy (Lynn) loses his job so he and his young family (Nichole, Buck, and Henderson) move to the backwoods of Georgia to help his eccentric grandfather. Jeremy’s Grandpa Vinny (Brown) has foolishly purchased a terribly run-down home for the elderly and he is in way over his head. Vinny’s prayers are answered (sort of) when Mr. Leroy S. Brown (David Mann) and his daughter, Cora (Tamela Mann) show up as needy investors.

5/4/21 update: Tyler Perry’s Assisted Living has been renewed through season three on BET.

What do you think? Do you hope that the Assisted Living TV show will be renewed for a second season? How would you feel if BET had cancelled this TV series, instead?

I love watching Tyler Perry’s Assisted Living! I’m 70 & throughout my entire career I worked in Nursing Hones. I find the humor to be spot on & actually ((giggle)) remembering past experiences with the elderly. Now I find myself an old gal too! I hope this Show continues bringing happiness and joy to everyone for years to come. Kudos Tyler; you never let us down.

This show is beyond terrible the family of four daughter, son, mother and father can not act ugh

Please, please, please bring back assisted living. Maybe it didn’t get enough advertising because everyone I know loves it. The cast is perfect. I need my fix, I need to know what’s going to happen to the Sheriff’s son. This story line needs continuation.

Yes I agree plezzzzzzzz BRING THEM ALL BK ASAP JJ

I watch them on BET & they’re current Shows. Hope this is helpful.

I want the 2nd season of Assisted Living to come on

Tyler Perry / Assisted Living. Want; Season 2 ,to keep going
I just like it so much, need to see what happens.
OMPL2

Want the show to be renewed

Really loved this show and now still no word if it will be renewed. My husband and I have laughed so hard at this show. We are just wanting to see more of it

Every time we enjoy a show they get cancelled. Is this show too ethic? I’m just saying with love.

I love assistant living. Uncle Vinny and Mr.Brown had me laughing so hard I was crying. Renew for another season please.

exactly, what she said, bring it back

Yes, I loved that show.