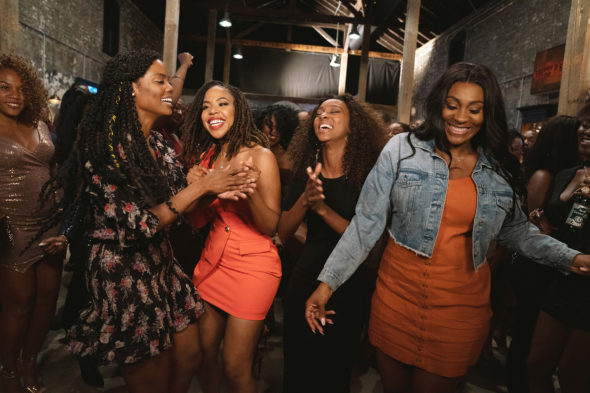 Tyler Perry’s Sistas is on a roll. The BET dramatic comedy series was renewed for a second season in May with plans to resume production in July, with plans for testing and quarantining in the current age of COVID-19. The cast and crew completed filming an entire season of 22 episodes in just two weeks. Now, BET has announced the second season of Sistas will begin airing on Wednesday, October 14th.

Here are some additional details about the premiere:

Fall in Love All Over Again With BET’s Hit-Dramedy, “Tyler Perry’s Sistas,” Wednesday, October 14 Starting at 9 PM ET/PT on BET and BET Her

NEW YORK — The wait is over! Today, BET and Tyler Perry Studios announced a premiere date for “Tyler Perry’s Sistas,” the #1 new scripted cable series for Black people 18-49 and 25-54. The one-hour dramatic comedy returns in back-to-back episodes, Wednesday, October 14, starting at 9 PM ET/PT on BET and BET Her. This new season will pick up right where it left off, with Tyler Perry taking viewers on an exhilarating ride of emotions and gut-busting predicaments that will test the ladies’ long-standing friendship. This band of women, intertwined with their newfound relationships, must navigate this new-age dating scene as they continue to search for love in their 30s. The talented ensemble cast of “Tyler Perry’s Sistas” season two includes KJ Smith, Mignon, Ebony Obsidian, Novi Brown, DeVale Ellis, Chido Nwokocha, Anthony Dalton II, Brian Jordan Jr., Kevin A. Walton, Trinity Whiteside, and Crystal Hayslett. “Tyler Perry’s Sistas” was filmed in July 2020 at Tyler Perry Studios in Atlanta, GA.

The “Tyler Perry’s Sistas” premiere dates news is announced on the eve of tonight’s back-to-back premieres of “Tyler Perry’s House Of Payne” and “Tyler Perry’s Assisted Living,” starting at 8 PM ET/PT on BET and BET Her.

About Tyler Perry Studios
Tyler Perry Studios is a state-of-the-art film and television production facility founded in 2006 by actor, producer, filmmaker, playwright, and philanthropist Tyler Perry. Located in Atlanta, Georgia on the historic grounds of the former Fort McPherson army base, the new 330-acre campus is one of the largest production studios in the country. It boasts a variety of shooting locations including 40 buildings on the national register of historic places, 12 purpose-built sound stages, 200 acres of green space and an expansive backlot.

What do you think? Do you enjoy watching the Sistas TV show? Will you be watching season two on BET?