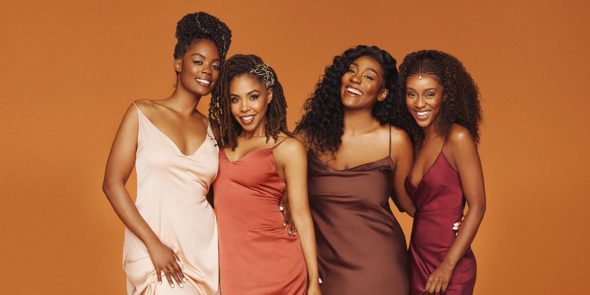 Will these ladies find happiness in the first season of the Sistas TV show on BET? As we all know, the Nielsen ratings typically play a big role in determining whether a TV show like Sistas is cancelled or renewed for season two. Unfortunately, most of us do not live in Nielsen households. Because many viewers feel frustration when their viewing habits and opinions aren’t considered, we invite you to rate all of the first season episodes of Sistas here. *Status update below.

What do you think? Which season one episodes of the Sistas TV series do you rate as wonderful, terrible, or somewhere between? Do you think that Sistas on BET should be cancelled or renewed for a second season? Don’t forget to vote, and share your thoughts, below.

I love this show.. One of my favorite.. Come on next season… Please

Please DO NOT cancel Sistas. I wait for Wednesdays, just to see the girls in action. Please, I enjoy watching the show, it is my favorite. I was saddened when The Oval stopped. This will be worst, as I love Wednesdays just for them. Please Mr. Perry, reconsider continuing Sistas.

This is an awesome show, the storylines are relatable, and very neat to life happenings. It is by far one of my favorite shows!!!

Don’t cancel Sistas, the Show is awesome. I look forward to every Wednesday to watch Sistas. I hope it can have season 2, will definitely watch it. The story line have some great points.

Don’t cancelled Sista. This is a great show. I make sure my schedule is clear between 9pm and 10pm. The Oval and Sista are two of the best shows on BET. Bring them back for a second season I would love to see more of these show

Please don’t cancel on Wednesday we used the. Day to have woman’s day were we get together and watch it and talk about what going on with the show and we get to talk about our life. We also know a lot of women that going through some of these thing.