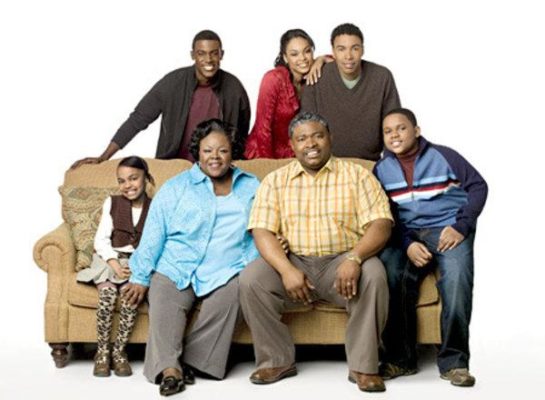 TV show description:
Created and produced by Tyler Perry, this sitcom revolves around a multi-generational family that lives together in one Atlanta home.

Curtis “Pops” Payne (LaVan Davis) is the family patriarch and the chief of the local fire department. He looks forward to spending quiet nights with his wife, Ella. That rarely happens though because Pops’ adult son still lives with them and his nephew’s family also moves in.

Ella (Cassi Davis), Curtis’ wife, is devoted to her church and, though she lives in a home dominated by the Payne men, is queen of the palace. She’s a nurturer, whether it’s helping stray members of her family or taking care of her college-aged son, Calvin (Lance Gross). Calvin always seems to have some type of hustle, and much of it seems to be geared around getting as much as he can for free at his parents’ house. Because of the constant changes to his college class schedule, his parents aren’t sure if wise-cracking Calvin is still even attending classes.

Curtis’ nephew, CJ Payne (Allen Payne), is a father of two who is forced to move in with his aunt and uncle after his wife burns down their home while using drugs. After his own father’s death, it was his uncle that raised him but it’s hard for CJ to totally accept Curtis’ guidance. Of course, it doesn’t help that his Uncle Curtis is also his boss down at the fire station. CJ’s ex, Janine (Demetria McKinney), beats her addictions and moves into the house with her ex and their kids, Jazmine (China Anne McClain), Malik (Larramie “Doc” Shaw), and twins Hayden and Jayden.

Miranda Lucas (Keshia Knight Pulliam) is a sexy con-artist who initially steals from Calin and Curtis. Calvin and she later start dating and eventually get married.

The local barbershop is filled with as interesting personalities as the Payne household. Floyd Jackson (Palmer Williams, Jr) is the self-absorbed owner of the Barber Shop. Kiki (Bobbi Baker) is a straight-forward barber and Dana Carter (Denyce Lawton) does nails. Another barber, Delante (Jason Dirden), eventually moves away and is replaced by Zack (Gary Owen), a white guy who sometimes feels out of place.

What do you think? Do you like the House of Payne TV show? Do you think it should be cancelled or renewed for another season?

When will house of payne and meet the browns be back on? Love those shows.

I want my show back tyler!!!! An I want my bobb’e j. Thompson on too.. Hez alllll mibe

This show should have last a lot longer. when a show is great it is cancelled but junk remains on the same channel. Such as the Bob Newhart show was lousy, tbut I the Simpson’s Bart was a bad influence on kids. Myrtle need to get a life and learn what is funny and what is not but, she probably liked the mentioned above.

This show was HORRIBLE thankfully TBS had some sense to cancel this show. This is the most UNFUNNY show that I have ever seen. The only GOOD thing I liked about this show was that it talked about real life issues that I could relate to. The rest of the show was just HORRIBLE

I disagree and can not believe that the show has been canceled ,i mean atleast they coul have raped up on the storie lines .I agree that some of the scting was over the top but i reallly liked the storie lines ,like you said hit on real issues anyway there are so many other programs that need to to be gone before this show ………..

Please Like this Page to Bring House of Payne back http://www.facebook.com/BringHouseOfPayneBack?ref=hl

IM SO MAD TO FIND OUT