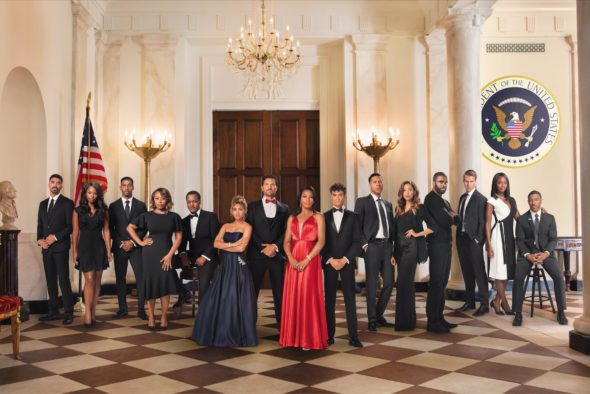 TV show description:
A soap opera series, The Oval begins as a new First Family moves into the White House. While it appears that the President, his family, and staff have everything anyone could want — money, status, and power — there’s plenty of lies, cheating, and mayhem behind these closed doors.

Hunter Franklin (Quinn) is the newly elected President of The United States and his wife, Victoria (Moore), is the First Lady. Gayle (Hurd) is their beautiful and spoiled daughter and Jason (Henderson) is their troubled son.

Helping the First Family is Richard Hallsen (Johnson), the esteemed White House butler who has served several administrations at the White House. He’s married to Nancy (Storey) and the father of Barry (Hebron). Barry is a young dad to his four-year-old daughter, Callie, and the boyfriend of Sharon (Renee), who works at a local pharmacy. The pharmacy is owned by Kareem Richardson (Law) and his father. Hard-working, Kareem longs to have a relationship with Sharon.

Donald Winthrop Collins) is the President’s Chief of Staff and is smart, demanding and manipulative. He’s married to Lilly (Payton), a fashion designer. Handsome and rugged, a man named Bobby (Cure) meets Lilly on a plane and neither of their lives will ever be the same again.

What do you think? Do you like The Oval TV show on BET? Do you think it should be cancelled or renewed for another season?

It started off okay, but as time goes on, it’s kind of stupid. Some of the acting is not good at all. Story lines draggggggged out far too long. Probably should come to an end. It’s nice that gives so many black actors a shot.

Cancel the oval getting way to stupid