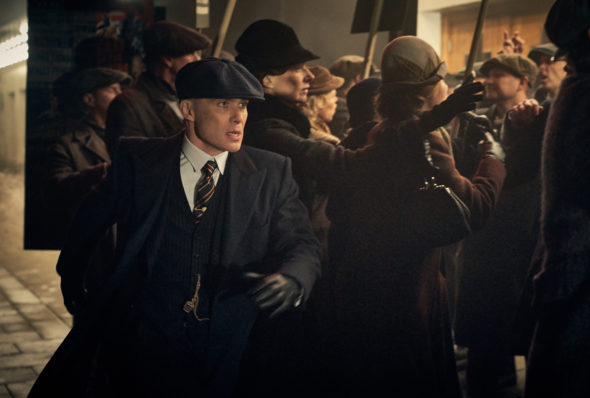 How will the big crash affect Tommy in the fifth season of the Peaky Blinders TV show on BBC One and Netflix? As we all know, the Nielsen ratings typically play a big role in determining whether a TV show like Peaky Blinders is cancelled or renewed for season six. Unfortunately, most of us do not live in Nielsen households and Netflix collects its own data. Because many viewers feel frustration when their viewing habits and opinions aren’t considered, we invite you to rate all of the fifth season episodes of Peaky Blinders here. *Status update below.

Streaming on the Netflix service in the United States, Peaky Blinders stars Cillian Murphy with Helen McCrory, Paul Anderson, Sophie Rundle, Finn Cole, Kate Phillips, Natasha O’Keeffe, Aidan Gillen, Jack Rowan, Charlie Murphy, Kingsley Ben-Adir, Harry Kirton, Packy Lee, Ned Dennehy, Ian Peck, and Benjamin Zephaniah. New cast members include Sam Claflin, Anya Taylor-Joy, Brian Gleeson, Neil Maskell, Kate Dickie, Cosmo Jarvis, and Emmett J Scanlan. Set in the lawless streets of Birmingham, UK and beyond, Peaky Blinders follows the evolution of leader Tommy Shelby (Murphy) from backstreet crime lord to legitimate businessman and member of parliament. In season five, the world is thrown into turmoil by the financial crash of 1929. When Tommy Shelby MP is approached by a charismatic politician with a bold vision for Britain, he realizes that his response will impact not only the future of his family but that of the entire nation.

What do you think? Which season five episodes of the Peaky Blinders TV series do you rate as wonderful, terrible, or somewhere between? Do you think that Peaky Blinders on BBC One and Netflix should be cancelled or renewed for a sixth season? Don’t forget to vote, and share your thoughts, below.

I LOVED this binge-worthy show. Superbly written and acted. Cillian Murphy is one of the best actors I have ever seen in my life. Amazing show that you absolutely must watch. Each season is better than the one before. Praying Netflix renews over an over again.