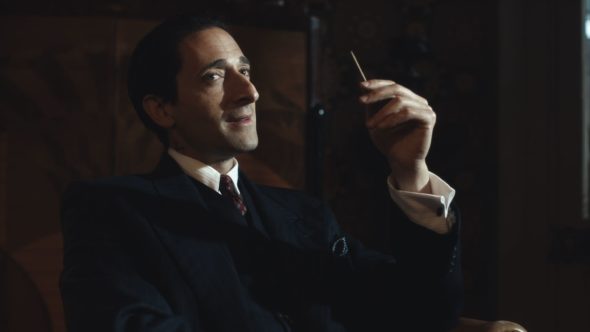 What’s next for Tommy Shelby and his gangster family? Has the Peaky Blinders TV show been cancelled or renewed for a fifth season on Netflix? The television vulture is watching all the latest TV cancellation and renewal news, so this page is the place to track the status of Peaky Blinders, season five. Bookmark it, or subscribe for the latest updates. Remember, the television vulture is watching your shows. Are you?

Fans don’t have to worry whether Netflix will cancel or renew Peaky Blinders for season five. The streaming service picked up the fourth and fifth seasons, back in 2016. Creator Steven Knight has said season five could be the end, but there’s no need to get ahead of ourselves, so sit back and enjoy season four. Meanwhile, I’ll keep an eye on the trades and update this page with breaking developments. Subscribe for free alerts on any Peaky Blinders cancellation or renewal news.

What do you think? Do you hope the Peaky Blinders TV show will be renewed for a fifth season? How would you feel if Netflix cancelled this TV series, instead?

Yes it most definitely should

Peaky Blinders is commissioned by the BBC for BBC Two and Netflix buy it in. The BBC took the risk when it committed to the show in the first place and happily coughed up the cash for series 4 and 5 as it did for the first three.