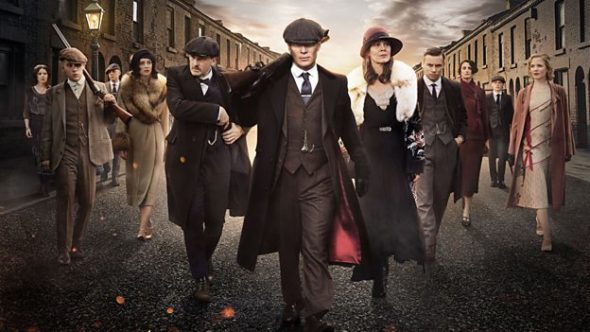 It’s time to return to Birmingham. Netflix has announced the fourth season of the Peaky Blinders TV show will premiere on Thursday, December 21, 2017. In UK, the season four debuted on BBC Two on November 15th.

A BBC and Netflix historical crime drama, Peaky Blinders stars Cillian Murphy, Helen McCrory, Paul Anderson, Aidan Gillen, Adrien Brody, and Tom Hardy. The fourth season kicks off in 1925, with Tommy Shelby (Murphy), who is estranged from his family, realizing he needs to go back home.

Reviews for the S4 opener coming out of the UK are stellar as the Shelby family is forced to reunite after S3’s intense finale saw Cillian Murphy’s Tommy turn the tables and have them all arrested.

The six-episode series from Caryn Mandabach Productions and Tiger Aspect has continued to build its popularity among a faithful fan base in 163 countries. Notably, Mandabach told Deadline last week that the BBC has seen “a huge shift in the audience demographic with younger viewers leading the way.”

Season 4 opens with Tommy estranged from the family and partaking of “sex, freedom and whiskey sours.” But when he realizes they are all in danger of annihilation, he summons them to return to the streets of Birmingham’s Small Heath, where a desperate fight for survival begins.

Notably, when Season 4 kicks off in the U.S., it will be minus The Weinstein Company’s name at the top of the show. The decision was made in October to scrub TWC’s credit, technically a production card, amid the scandal surrounding Harvey Weinstein. Peaky Blinders is not a TWC production, but was originally acquired by the company in 2013 when it took U.S. TV and VOD rights and later sold the saga on to Netflix.

Joining the cast in Season 4 are Adrien Brody as mafia scion Luca Changretta; Charlie Murphy as Jessie Eden, the trade union activist who made history in the 1920s fighting for equal pay for women; and Game of Thrones alum Aidan Gillen as Aberama Gold, a larger-than-life gypsy who Knight describes as “the devil you know.” Returning cast includes Paul Anderson, Helen McCrory, Tom Hardy, and Charlotte Riley appearing for the first time since Season 2 as May Carleton.

Season 5 has already been ordered by BBC Two with production to begin next year. It will be set in 1928 and 1929. Although there have been suggestions that Season 5 will be the end of the run for Peaky, Knight recently told me, “The thought has long been to finish after Season 5, but the momentum and love for the thing seems to still be growing exponentially and this is making us pause before deciding finally.”

What do you think? Are you a fan of the Peaky Blinders TV series? Do you plan to stream season four when it drops to Netflix? Let us know, below.