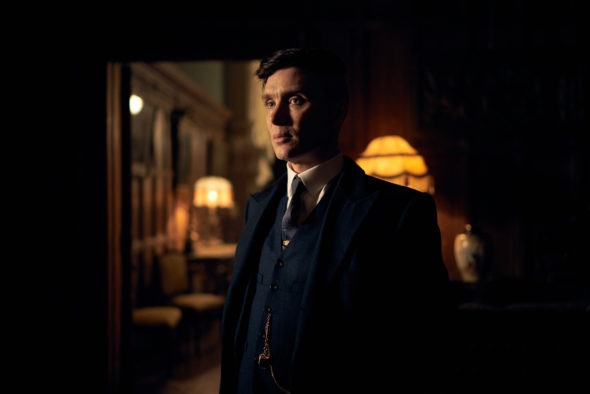 Will we see the end of Tommy’s transformation? Has the Peaky Blinders TV show been cancelled or renewed for a sixth season on BBC One and Netflix? The television vulture is watching all the latest cancellation and renewal news, so this page is the place to track the status of Peaky Blinders, season six. Bookmark it, or subscribe for the latest updates. Remember, the television vulture is watching your shows. Are you?

Streaming on the Netflix service in the United States, Peaky Blinders stars Cillian Murphy with Helen McCrory, Paul Anderson, Sophie Rundle, Finn Cole, Kate Phillips, Natasha O’Keeffe, Aidan Gillen, Jack Rowan, Charlie Murphy, Kingsley Ben-Adir, Harry Kirton, Packy Lee, Ned Dennehy, Ian Peck, and Benjamin Zephaniah. New cast members include Sam Claflin, Anya Taylor-Joy, Brian Gleeson, Neil Maskell, Kate Dickie, Cosmo Jarvis, and Emmett J Scanlan. Set in the lawless streets of Birmingham, UK and beyond, Peaky Blinders follows the evolution of leader Tommy Shelby (Murphy) from backstreet crime lord to legitimate businessman and member of parliament. In season five, the world is thrown into turmoil by the financial crash of 1929. When Tommy Shelby MP is approached by a charismatic politician with a bold vision for Britain, he realizes that his response will impact not only the future of his family but that of the entire nation.

Will there be a sixth season of Peaky Blinders on Netflix? The series is produced by BBC One in the United Kingdom so it seems like the decision to cancel or renew comes from across the pond. Netflix licensing the series likely helps defray some of the production costs but it’s probably not a determining factor. I suspect that Peaky Blinders will be renewed, in part because there’s already been talk of seasons six and seven being in the works. If that happens, I have no doubt that Netflix will sign on to stream it. I’ll update this page with breaking developments. Subscribe for free alerts on Peaky Blinders cancellation or renewal news.

What do you think? Are you glad that the Peaky Blinders TV show has been renewed for a sixth season? How do you feel that BBC One and/or Netflix is ending this TV series?

Have to have a decent ending. Do not cancel

Pinky Blinders is the reason I renewed my membership with Netflix. One of the best series I’ve seen in years. Mr.Knight is brilliant, thank you for writing this climatic on the edge of my seat film. However, I’ve read that Mr. Knight is saying the sixth season will be tragic. I already know the family member who betrayedTom it’s Michael and if u kill off TOM in season six I might just stop watching it all together!!! Not really, tho he is the one who makes this series worth watching. Again, Michael & his new wife betrayed TOM, and I’m… Read more »