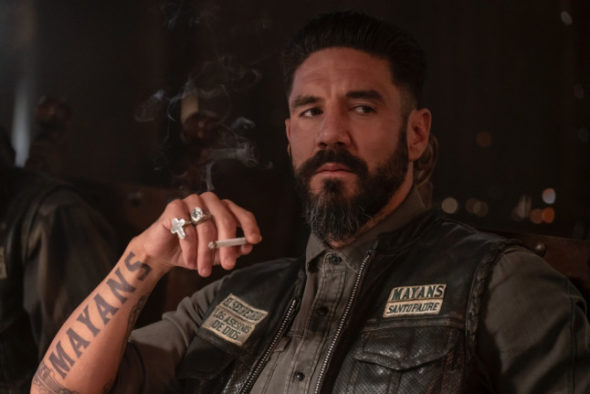 What choices will haunt EZ in the third season of the Mayans MC TV show on FX? As we all know, the Nielsen ratings typically play a big role in determining whether a TV show like Mayans MC is cancelled or renewed for season four. Unfortunately, most of us do not live in Nielsen households. Because many viewers feel frustrated when their viewing habits and opinions aren’t considered, we invite you to rate all of the third season episodes of Mayans MC here.  *Status Update Below.

A FX drama series, the Mayans MC TV show stars JD Pardo, Clayton Cardenas, Edward James Olmos, Ray McKinnon, Carla Baratta, Danny Pino, Michael Irby, Raoul Max Trujillo, Richard Cabral, Emilio Rivera, Sarah Bolger, and Sulem Calderon. The story follows Ezekiel “EZ” Reyes (Pardo), a newly patched member of the Mayans M.C. charter on the Cali/Mexi border. Once the golden boy with the American Dream in his grasp, EZ and his brother Angel (Cardenas) are closer than ever after uncovering the truth behind their mother’s murder while their father Felipe (Olmos) struggles to reconcile the choices he and his sons have made. After United States Assistant District Attorney Lincoln Potter (McKinnon) threatens to deport Felipe, EZ and Angel chose to leverage incriminating information to protect him rather than to free rebel leader Adelita (Baratta) from federal custody, leaving her to give birth to Angel’s son while in handcuffs. Meanwhile, Miguel Galindo (Pino) is left reeling over the loss of his mother to an apparent suicide, while others quietly suspect foul play. Additionally, the Mayans seek vengeance on their rivals, the Tijuana M.C. Vatos Malditos, after a surprise attack on their club. When the smoke clears, they discover the body of a Sons of Anarchy Motorcycle Club Redwood Original – there will be hell to pay.

What do you think? Which season three episodes of the Mayans MC TV series do you rate as wonderful, terrible, or somewhere between? Do you think that Mayans MC should be cancelled or renewed for a fourth season on FX? Don’t forget to vote, and share your thoughts, below.

I loved season one and two of mayans. It felt like it had the same DNA as sons of anarchy. The story , pace of the show, dark humor, witty dialogue. Kurt sutter and his creative vision and or leadership is why this whole thing was successful. I was worried when kurt sutter was fired. Very concerned about mayans season 3. My favorite new story. I watched first episode mayan season 3. Couldnt get through 1 minute of it. Dialogue flat and bland. The pacing was beyond slow. The opening familiar music gone. Replaced with heavy whatever, real world political… Read more »

The Mayans MC just isn’t anywhere close to being the great show SOA was in the first few seasons. Even that show got ridiculous after a while. This show was okay for seasons 1&2, but this season is awful.

I’m sure some like it and will watch, but this story line is beyond boring.

This season many of the men have become weeping drama queens. What has happened to this show?

I sure could tell there is a new writer not impressed I hope he dosen’t get the show canceled I loved both 1&2 I’m here because I wanted to find out what changed in the writing of the show I knew right away it’s not the same really upset about killing the dog walker terrible dosen’t fit the show there tough guy’s I get an love that but come on!! Hope the old writer returns

love the show but the writing is not up to season 1 and 2 they need a fresh look at where this season is going and bring some new writers in too. and whats up with the song change it does not fit this show bring back the old song and if i had my way bring back Kurt Sutter’ the show is not the same without him