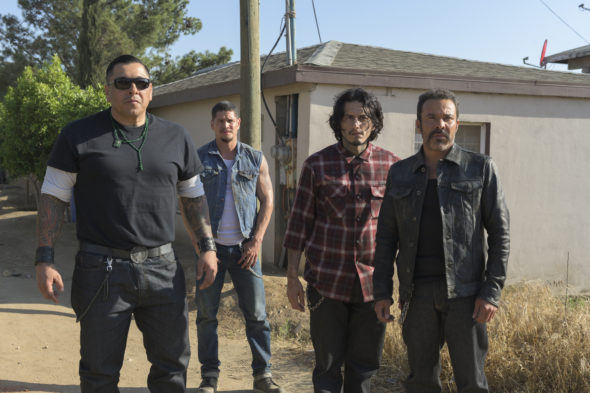 Does the second season of the Mayans MC TV show on FX have you revved up? As we all know, the Nielsen ratings typically play a big role in determining whether a TV show like Mayans MC is cancelled or renewed for season three. Unfortunately, most of us do not live in Nielsen households. Because many viewers feel frustration when their viewing habits and opinions aren’t considered, we’d like to offer you the chance to rate all of the Mayans MC season two episodes here. *Status update below.

A Sons of Anarchy spin-off airing on the FX network, Mayans MC stars JD Pardo, Clayton Cardenas, Edward James Olmos, Sarah Bolger, Michael Irby, Carla Baratta, Antonio Jaramillo, Raoul Max Trujillo, Richard Cabral and Danny Pino. This next chapter in Kurt Sutter’s saga centers on Ezekiel “EZ” Reyes (Pardo), a prospect in the Mayans M.C. charter on the Cali/Mexi border. He is trying to mend fences with his brother “Angel” (Cardenas) while searching for the truth behind their mother’s death. Meanwhile, their father, Felipe (Olmos) wants to his sons to walk the straight and narrow path.

What do you think? Which season two episodes of the Mayans MC TV series do you rate as wonderful, terrible, or somewhere between? Should FX cancel or renew Mayans MC for a third season? Don’t forget to vote, and share your thoughts, below.

Love Mayans. So glad to see it after Sons faded away. Miss it but glad they blended them..way to ride!!!!!

I Really enjoyed the show and think it will be a very successful show.. Great idea brining In Sam Crow!! I can’t wait until season 3 starts Way to go Mayans

I loved Sons of Anarchy and this is the only show to fill the void. Please renew the show next season and further!