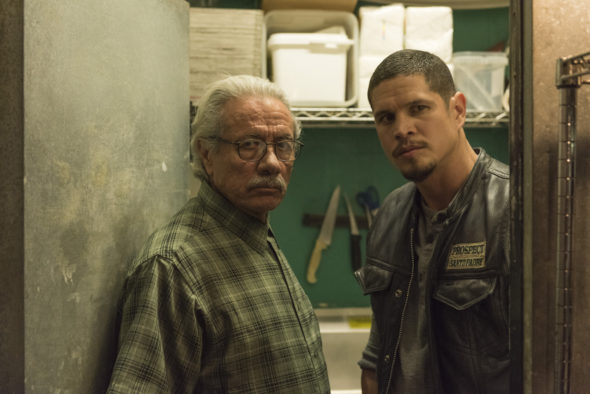 Does the first season of the Mayans MC TV show on FX get your motor running? As we all know, the Nielsen ratings typically play a big role in determining whether a TV show like Mayans MC is cancelled or renewed for season two. Unfortunately, most of us do not live in Nielsen households. Because many viewers feel frustration when their viewing habits and opinions aren’t considered, we’d like to offer you the chance to rate all of the season one episodes of Mayans MC below.

A Sons of Anarchy spin-off airing on the FX network, Mayans MC stars JD Pardo, Clayton Cardenas, Edward James Olmos, Sarah Bolger, Michael Irby, Carla Baratta, Antonio Jaramillo, Raoul Max Trujillo, Richard Cabral and Danny Pino. Recurring guest stars in the first season include Emilio Rivera, Frankie Loyal, Joseph Lucero, Vincent Rocco Vargas, Maurice Compte, Gino Vento, Tony Plana, and Ada Maris. This next chapter in Kurt Sutter’s saga centers on Ezekiel “EZ” Reyes (Pardo), who is fresh out of prison and a prospect in the Mayans M.C. charter on the Cali/Mexi border. Now, EZ must carve out his new identity in a town where he was once the golden boy whose sights were set on the American Dream.

What do you think? Which season one episodes of the Mayans MC TV series do you rate as wonderful, terrible, or somewhere between? Should FX cancel or renew Mayans MC for a second season? Don’t forget to vote, and share your thoughts, below.

Love this series I haven’t missed an episode yet. Loved S.O.A just as much I look forward to watching more episodes and more seasons. I love all the twist and turns in the show it’s like a chicano version of S.O.A and to top it off Edward James Olmos my favorite producer/actor whom I have watched on various movies growing up is great on the show and a bonus to look forward to many episodes to see what’s in store with the Mayans and the Reyes familia Kurt this is another genuine masterpiece you have created thank you I want… Read more »

It’s like cheesecake, nothing compares to New York Style ( Sons of anarchy ) but Mayans MC “satisfies” my taste

I am LOVING this series. Mayans MC just keeps getting better and better with each episode. As soon as the episode ends we are already having conversations regarding the episode and what we think will happen next. Sutter you are a Genius! Keep ’em coming!

So far, so good. It takes a little time to build up momentum for a show. They have planted some seeds here that can make for a really great series if people are patient enough to let the story and characters develop.

I wanted to like Mayans Mc, but it doesn’t have a spark SOA was the best show EVER. I was hoping for 1st 9 prequel. Just not up to Kurt’s writing talent at all.

I wouldn’t give a plug nickel for Mayans MC. It lacks the action and storylines that SOA had. I watched SOA live from the first episode to the last, but this show is way too boring for me to stay up and watch. The action is way to slow to keep my attention.

I LOVE THIS SHOW

BORING BORING BORING. DOES NOT KEEP MY INTEREST LIKE SOA DID. KURT YOU SPOILED US !! DONT MESS WITH SAMECRO. THIS WAS NOT A GOOD SPINOFF. IT ONLY IS LIKEABLE WITH ONE DEMOGRAPHIC OF PEOPLE. IM NOT INTO NOVELLAS.

I agree with you. CSons had me soiled. It was a super great show. This is boring. So sad.

I agree 100% with everyone !!!!! This show does not have the character and love that the SONS had. I also watched every episode of SOA, and miss it badly. I am very dissappointed with the Mayans. And if there is one thing that I hate the most and that is having to read everything they say as you try to watch the show, it really sucks.

absolutely agree
long spots of boring dialogue with no payoff
like the characters and the actors who are struggling to make the horrible writing into something worth watching, but i think this just can’t be saved if it keeps in this direction.

Agreed, its close to a soap opera, dialogs were like reading script, lack of humor, scenes mostly in a room.