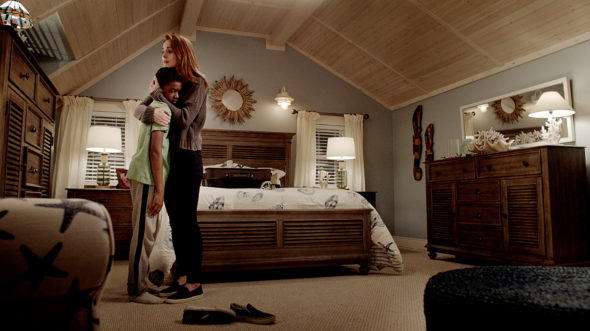 Is Letty’s best behavior good enough? Has the Good Behavior TV show been cancelled or renewed for a third season on TNT? The television vulture is watching all the latest cancellation and renewal news, so this page is the place to track the status of Good Behavior, season three. Bookmark it, or subscribe for the latest updates. Remember, the television vulture is watching your shows. Are you?

Airing on the TNT cable channel, Good Behavior stars Michelle Dockery as thief and confidence artist Letty Raines. The cast also includes Juan Diego Botto, Terry Kinney, Lusia Strus, Joey Kern, Nyles Julian Steele. Although Letty always gets what she wants, in regaining custody of her son, Jacob (Steele), she nearly lost her love — the assassin, Javier (Botto). In season two, she’s mended fences with both him, and with her mother, Estelle (Strus). Now, Letty, Javier, and Jacob are on the run from FBI Agent Rhonda Lashever (Ann Dowd), and striving to settle into a normal life.

The second season of Good Behavior averaged a 0.15 rating in the 18-49 demographic and 580,000 viewers. Compared to season one, that’s down by 19% in the demo and down by 22% in viewership. Learn how Good Behavior stacks up against other TNT TV shows.

Will TNT cancel or renew Good Behavior for season three?  The show is doing okay but is not a great performer in the ratings. Because TNT doesn’t have a lot of original programming right now, I suspect that a third season renewal is forthcoming. Subscribe for free updates on any Good Behavior cancellation or renewal news.

11/7/18 update: TNT has cancelled the Good Behavior TV show so there won’t be a third season.

What do you think? Were you hoping the Good Behavior TV show would be renewed for a third season? Are you sorry that TNT cancelled this TV series, instead?

I just streamed both seasons on hulu and was so enthralled. I can’t believe it was canceled. Bring it back!!

I love Good Behavior !
PLEASE give us a 3rd season or more.

Please bring back the show! I haven’t been hooked on a series like this for a while. Watched both Seasons within 3 days! Don’t understand why well acted, good story line and captivated characters shows always got cancelled but not those nonsense reality tv. Please Netflix or Amazon prime picks this show up! I’m happy to pay subscription!

Please bring Good Behavior back. This show captures you from the beginning and takes you on a ride no other tv show can. I would love it if Netflix or amazon would pick it up. TNT made a huge mistake.

Attention Netflix, Amazon, Hulu, Starz, Showtime HBO,any power houses who appreciate great television.
Please, please, please bring this show back. It was honestly one of the best shows I’ve had the pleasure to watch. Good Behavior needs a proper ending; those amazing characters deserve it.

Husband and I loved this series. But not many people knew about its existence. Terrible shame it didn’t get better exposure and even more so that it was canceled.

WHY ON EARTH WOULD YOU CANCEL YJIS INCREDIBLE SHOW?!?!?!

Change your mind and PUT SEASON THREE ON! PLEASE!!!

please bring letty and javier back

OH NO! please bring this show back! I looked forward to seeing this show. I loved it~ PLEASE reconsider your decision. BRING LETTY BACK

Offer it to prime tv this show has sooooo much potential her come back story is not done her love life is still to be finished/ beginning/ what ever they are both on fire offer it to prime this is a great adult program with many roads to travel don’t leave me !!!! Love your writing/ her outfits / Shenanigans her relationships with her parol officer more hotels and bad people waiting to be discovered . His criminal family and there dark secrets still to be unfolded lost and lots of back stories hit men looking for him it has… Read more »

If TNT is going to let this go, I hope Netflix or Amazon Prime pick it up…. This show was amazing

TNT…PLEASE PLEASE bring Good Behaviour back! This is an exceptional show! Great cast, unique storylines. One of the few quality shows on TV these days…I LOVED it! I hope you’ll reconsider and bring this gem back .