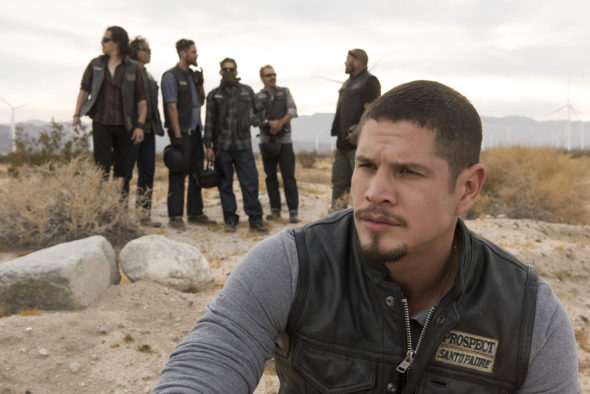 Have we come to the end of the road? Is the Mayans MC TV show cancelled or renewed for a second season on FX? The television vulture is watching all the latest cancellation and renewal news, so this page is the place to track the status of Mayans MC season two. Bookmark it, or subscribe for the latest updates. Remember, the television vulture is watching your shows. Are you?

A Sons of Anarchy spin-off airing on the FX network, Mayans MC stars JD Pardo, Clayton Cardenas, Edward James Olmos, Sarah Bolger, Michael Irby, Carla Baratta, Antonio Jaramillo, Raoul Max Trujillo, Richard Cabral and Danny Pino. Recurring guest stars in the first season include Emilio Rivera, Frankie Loyal, Joseph Lucero, Vincent Rocco Vargas, Maurice Compte, Gino Vento, Tony Plana, and Ada Maris. This next chapter in Kurt Sutter’s saga centers on Ezekiel “EZ” Reyes (Pardo), who is fresh out of prison and a prospect in the Mayans M.C. charter on the Cali/Mexi border. Now, EZ must carve out his new identity in a town where he was once the golden boy whose sights were set on the American Dream.

The first season of Mayans MC averaged a 0.63 rating in the 18-49 demographic and 1.60 million viewers. Find out how Mayans MC stacks up against the other FX TV shows.

Will FX cancel or renew Mayans MC for season two? The series premiered with very strong numbers. Though the ratings immediately dropped, the series remains one of the channel’s top-rated shows. I think it will be renewed but I’ll keep an eye on the Nielsens and update this page with breaking developments. Subscribe for free Mayans MC cancellation or renewal alerts.

What do you think? Are you glad that the Mayans MC TV show has been renewed for a second season? How would you feel if FX had cancelled this TV series, instead?

absolutely brilliant. was a bit hesitant after SOA but i loved it. can’t wait for season 2