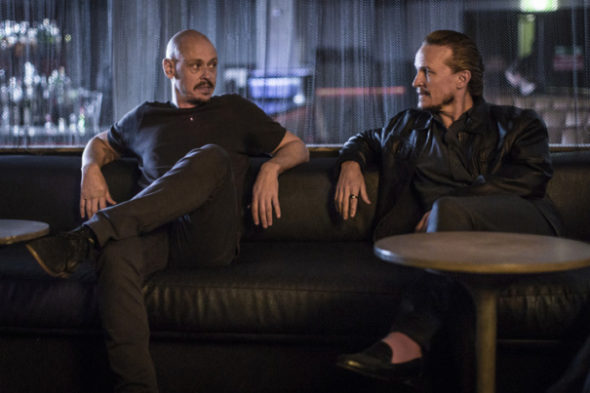 Ray knows how to be a hitman but is his show be a hit in the ratings? Has the Mr Inbetween TV show been cancelled or renewed for a second season on FX? The television vulture is watching all the latest cancellation and renewal news, so this page is the place to track the status of Mr Inbetween season two. Bookmark it, or subscribe for the latest updates. Remember, the television vulture is watching your shows. Are you?

Airing on the FX cable channel, Mr Inbetween was created by its star, Scott Ryan. The series also stars Damon Herriman, Justin Rosniak, Brooke Satchwell, Jackson Tozer, Nicholas Cassim, Chika Yasumura, Edmund Lembke-Hogan, and Matt Nable. In the series, Ray Shoesmith (Ryan) struggles to juggle all of the roles that many adult men have in life — a father, ex-husband, boyfriend and best friend. His life is further complicated because Ray also happens to be a hitman-for-hire.

The first season of Mr Inbetween averaged a 0.17 rating in the 18-49 demographic and 477,000 viewers. Find out how Mr Inbetween stacks up against the other FX TV shows.

The Mr Inbetween TV show was commissioned for FX Australia as its first original drama production but that channel closed before the series could air. FX is airing the first season out of primetime and over the course of just three weeks so it doesn’t seem like there will be a second season of Mr Inbetween. I’ll update this page with breaking developments. Subscribe for free Mr Inbetween cancellation or renewal alerts.

10/10/18 update: Mr Inbetween has been renewed for a second season on FX. Details here.

What do you think? Are you glad that the Mr Inbetween TV show has been renewed for a second season? How would you feel if FX had cancelled this TV series, instead?

Awesome show. Can’t watch it at normal times but have watched all the episodes. Can’t wait to find out what happens next season.

Love this show. Ray is very goid and cant wait to see season 3. Hurry up already….!!!!

Looking forward to season two. Well put together and leaves you wanting more and more.

Excellent show, it would be a crime if they didn’t renew it. I wish they had made the epps 1 hour though. Half hour epps just are not long enough.

AWESOME show!!
Nice to see something fresh.
Funny, but seriously realistic.
Cast of all stars waiting to explode.
Can’t wait for season 2!!!!!!!!

Yes their definitely needs to be a second season of Mr In between!! Show is a masterpiece and I don’t wanna stop watching….