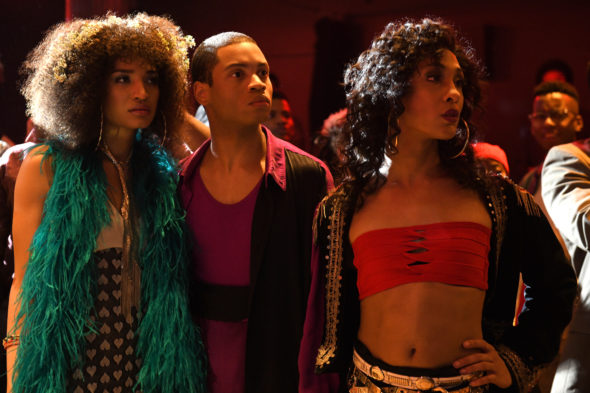 Has FX taken another bite of the Big Apple? Is the Pose TV show cancelled or renewed for a second season on FX? The television vulture is watching all the latest cancellation and renewal news, so this page is the place to track the status of Pose season two. Bookmark it, or subscribe for the latest updates. Remember, the television vulture is watching your shows. Are you?

The first season of Pose on FX averaged a 0.25 rating in the 18-49 demographic and 645,000 viewers. Find out how Pose stacks up against the other FX TV shows.

Will FX cancel or renew Pose for season two? The ratings have been pretty good (for an FX show) and it’s been getting quite a bit of attention so I think that Pose will be renewed. For now, I’ll keep an eye on the Nielsens and update this page with breaking developments. Subscribe for free Pose cancellation or renewal alerts.

What do you think? Are you glad that the Pose TV show has been renewed for season two? How would you feel if FX had cancelled this TV series, instead?

I love this cast…This is real life…All of us need to feel their pain and anguish in this community…They are no different from the straight community…The only thing is they have problems because the powers to be do not approve..How awful for those bigoted, racist people…Keep this going..I love each and everyone one of you..And yes I have been around the block a few times..

I love this show! Was so worried about cancellation cause it was gone for so long!

I loved POSE,I’m glad they’re bringing it back for another season

Every time We have a show that reflects our LGBTQ status it doesn’t last. When will we be able to show our love and support??????

Oh my goodness, what an awesome show! I still watch the episodes over and over, on Xfinity’s On Demand. The writers are excellent, the actors are super impressive and Billy Porter, is my favorite; due to his flawless acting / timing and his magnificent singing voice. Pray Tell, let Donny Hathaway, have it!! Now, don’t get it twisted, Blanca sho-nuff went Home! Whoever, selects the music for each scene, is off the chain, they nail it every time, and The Ballroom music brings back wonderful memories for me! Wonderful, wonderful show! If, it cancels, Imma hurt somebody! LOVE POSE!

I hope they don’t get rid of POSE I feel it’s a good sight on the gay and transgender community and they trials and tribulations they experience in the LBGTQ community especially an the era when HIV and AIDS was so high.

I agree, love the tremendous talent of all the actors, finally something on television that has great writing, directing and a group of wonderful actors, looking forward— hopefully to another season!

Love it, we need this kind of show right now. The transgender/African community is suffering greatly right now. All of us need to support our brothers and sisters of color in this new, ugly Trumpworld……