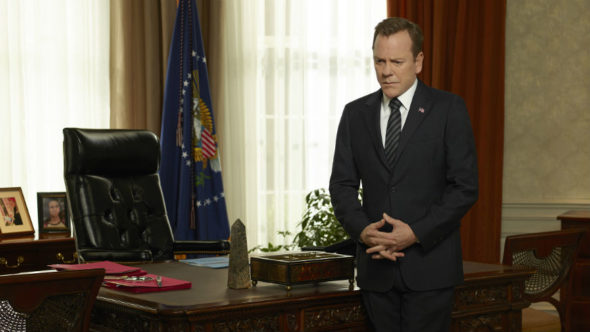 How long will President Kirkman preside over our long, national nightmare? Is the Designated Survivor TV show cancelled or renewed for a third season on ABC? The television vulture is watching all the latest cancellation and renewal news, so this page is the place to track the status of Designated Survivor season three. Bookmark it, or subscribe for the latest updates. Remember, the television vulture is watching your shows. Are you?

Designated Survivor premiered to much lower numbers than last season and the ratings have dropped quite low over the course of the season. Though ABC wants this series to survive to see a third season, I just don’t think enough viewers tune in. I’ve heard that it does well internationally. If it is renewed, that will be the reason why. For now, I’ll keep an eye on the Nielsens and update this page with breaking developments. Subscribe for free updates on any Designated Survivor cancellation or renewal news.


What do you think? Should ABC have renewed its  Designated Survivor TV show for a third season? Are you glad that Netflix saved it?

I liked it in the beginning but season three was trash talk and just nasty. Lost interest. Got tired of hearing the F word over and over. What happened?

What was once a great show has turned into garbage. Were you folks trying to capture every audience available with your obscene story lines and vulgarity? Lost me completely.

We loved Designated Survivor seasons 1&2 and were thrilled to hear Netflix had season 3, we were so disappointed, the language is so Foul in season 3, what happen to the tremendous Characters in the program, their language and skills were top notch in first 2 seasons and now has went trash! Why? It did not make show better, if that is all you can get for writers now, you are scraping the bottom of the pit.

I really enjoyed the first two seasons, but in season 3, the language was so foul and vulgar, such a change from seasons 1 and 2. I’m very disappointed with this change, so I will not be watching the rest of the season. The show was good with out that.

Seaon 3 episode 1 was quite a departure from the first two seasons. Foul obscene language from every main character within the first 20 minutes locked my family in as non-watchers. We didn’t finish the episode, and will not watch it again. How could a cast of characters change personality so quickly? Uh….Netflix writers? The show went downhill as quickly as that. Netflix should rethink the popularity of vulgarity. We’re done with that type of show. Thanks for letting me express my view. Designated Survivor should not survive if this is it’s new look.

We enjoyed the first season, but noticed a marked deterioration in story line and character development the second season. The stories seemed to follow a inflexible pattern: crisis arises; president’s moral suasion and/or simplistic; unrealistic action solves crisis, new crisis arises. The character development that did occur, especially the president, seemed too extreme and continued to escalate in unreasonable leaps.

Given the above, we’re not surprised at the cancellation. We would hope that season 3 reigns in all the above and focuses on a tighter, more realistic story line.

Happy to hear it was picked up. Great show

So glad Netflix picked this up. Love this show

I loved the show and am very disappointed that it was cancelled. I do not have Netflix and won’t be able to watch further episodes.

Yes! I am so glad Netflix saved it!

I’m so disappointed I really liked the show! I don’t have Netflix, so I won`t get to watch the show anymore.

It’s easy to tell if a major network will cancel a series. If it’s good, it will be canceled. If it’s crap, it will stay on forever.

I really enjoyed the show. Good plots, good cast, give it a B+. Seinfeld gets A’s.

Season three did turn to crap.

You would be disappointed. The language is foul and story line totally unrealistic.