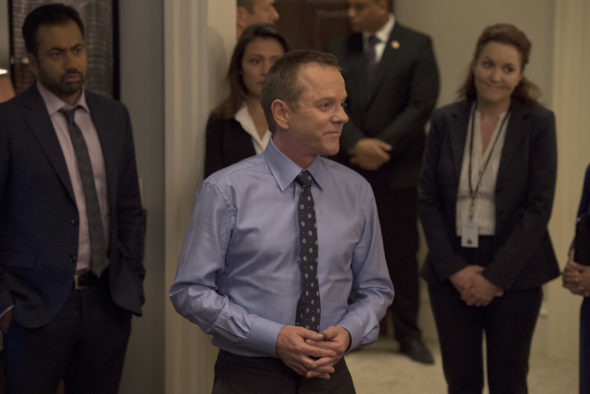 How well does President Kirkman preserve, protect and defend the Constitution of the United States in the second season of the Designated Survivor TV show on ABC? As we all know, the Nielsen ratings typically play a big role in determining whether a TV show like Designated Survivor is cancelled or renewed for season three. Unfortunately, most of us do not live in Nielsen households. Because many viewers feel frustration when their viewing habits and opinions aren’t considered, we’d like to offer you the chance to rate all the Designated Survivor season two episodes here.

What do you think? Which season two episodes of the Designated Survivor TV series do you rate as wonderful, terrible, or somewhere between? Should ABC cancel or renew Designated Survivor  for a third season? Don’t forget to vote, and share your thoughts, below.

This was great show, never missed it. I can’t believe they keep these shows like the Bachelorette and other reality shows. This was a decent show to watch. Just sad we live in a society that wants to watch crazy fake drama reality shows, people fighting, etc…

My wife loved this show and couldn’t wait to watch we truly loved the show and how it kept you on the edge of your seat wit all the twist and tune in the storyline. Please bring it back! One of the best shows ever!

One of he best tv series ever shown. Story is perfect. Acted flawlessly. We should need
more like this in your channel. Awesome. Please renew!!!

Another good show, a keeper!

I cannot believe that Designated Survivor was cancelled, it was one of the best shows out there! I looked forward to watching it every week and it always kept me on the edge of my seat! At least I still have TWD! Please, please reconsider!!!

You are 100% right. Designated Survivor was great. I kept up on all of them rather than record for weeks or months.

Seriously? You keep The Bachelorette but cancell this? The PROPOSAL? WHAT? SMH…What ? Splitting up together? All 3 of these shows suck and blow…

Shouldn’t have been cancelled. It was a great show. So much better than Madam Secretary

That’s for sure. I love Designated Survivor. Great acting, too.