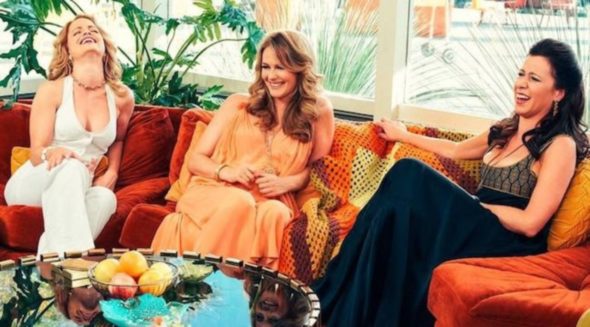 It looks like the 1970s are over — again. Paramount Network has cancelled their period dramedy, American Woman, after one season of 11 episodes. The now defacto series finale aired in August.

Based on the childhood of Kyle Richards, American Woman stars Alicia Silverstone, Mena Suvari, Jennifer Bartels, Makenna James, Lia McHugh, Cheyenne Jackson, James Tupper, Diandra Lyle, Tobias Jelinek, Jonathan Chase, and Sam Morgan. The series centers on Bonnie  Nolan (Silverstone), a single mother of two daughters. Second-wave feminism is on the rise, and the sexual revolution is in full force, when the heroine discovers her husband, Steve (Tupper), is having an affair. Now, Bonnie has to figure out how to make it on her own, with a little help from her friends, Diana (Bartels) and Kathleen (Suvari).

The second episode of American Woman saw a big drop off in the ratings, falling more than 52% in the demo. The numbers continued to dwindle downward with the final episode attracting a 0.06 demo and 326,000. In contrast, Paramount’s Yellowstone drama, which also aired during the summer months, averaged a 0.38 demo and 2.24 million.

The channel isn’t getting out of the dramedy business however. It’s been announced that the sixth season of TV Land’s Younger series will move to Paramount. It will begin airing in January alongside new series First Wives Club and the newly ordered Emily in Paris (from Younger’s Darren Star).

What do you think? Did you enjoy watching the American Woman TV show? Are you sorry that there won’t be a second season? Why do you think this show didn’t catch on?

Well I still have series one taped and am watching the last show bcuz my DVR is full. I wish they would have continued with the show, it was really good ….maybe just for us boomers?

I loved the show, such a pity Paramount! Here is hoping another network picks up the show.

Hate to see it go! Please bring it back!

Please don’t cancel American Woman!!! It’s a great show! Everyone I know loves it….Please bring it back this summer…The cast is Amazing, stories are Amazing…we need to see what happens to Bonnie and friends! Please Paramount…bring it back

I really enjoyed the show I finished it and super upset there’s not another episode! What the what the heck?! It’s a shame it’s the first show or anything I’ve watched on Paramount disappointed! The code at the bottom I had to type in was whtf hahaha!

I loved this show! Took me a while to find it but once I did I was hooked. Very disappointed it’s already cancelled. Maybe another network will pick it ip.

I liked this show. This was my era!!

This was a great show. It was a unique show. It seems every time I like a show it gets cancelled.

I feel the same.