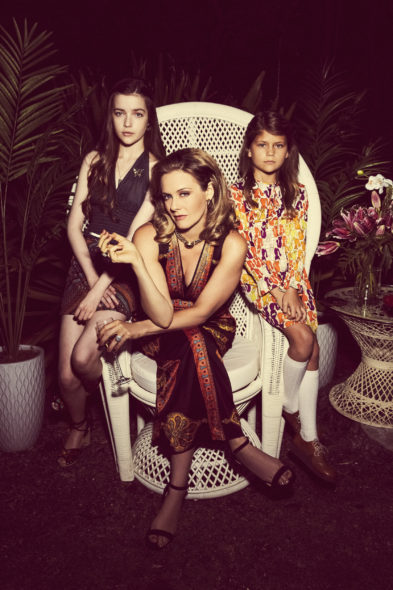 Are you enjoying the nostalgia during the first season of the American Woman TV show on Paramount Network? As we all know, the Nielsen ratings typically play a big role in determining whether a TV show like American Woman is cancelled or renewed for season two. Unfortunately, most of us do not live in Nielsen households. Because many viewers feel frustration when their viewing habits and opinions aren’t considered, we’d like to offer you the chance to rate all of the American Woman season one episodes here.

A Paramount Network dramedy, American Woman stars Alicia Silverstone, Mena Suvari, Jennifer Bartels, Makenna James, Lia McHugh, Cheyenne Jackson, James Tupper, Diandra Lyle, Tobias Jelinek, Jonathan Chase, and Sam Morgan. The series centers on Bonnie Nolan (Silverstone), a single mother of two daughters. Second-wave feminism is on the rise, and the sexual revolution is in full force, when the heroine discovers her husband, Steve (Tupper), is having an affair. Now, Bonnie has to figure out how to make it on her own, with a little help from her friends, Diana (Bartels) and Kathleen (Suvari).

What do you think? Which season one episodes of the American Woman TV series do you rate as wonderful, terrible, or somewhere between? Should Paramount Network cancel or renew American Woman for a second season? Don’t forget to vote, and share your thoughts, below.

Yes it should definitely be an hour and it represented the 70’s pretty darn good! Please please renew!

REALLY? You would rather play old reruns of Bar Rescue (which I also watch but the NEW ones) and other old shows over and over for hours and hours straight? American Woman was great for the first year and sure to only get better. Great casting and story! Come on…there has to be Network out there with some sense PLEASE????

Please reconsider Paramount, it’s the best show I’ve seen in years. I looked forward to every episode and was looking forward to season 2. PLEASE!

I am so disappointed that American Woman has been cancelled. It is the number 2 recorded program in my record list of 72 programs. Second to only Yellowstone.
Please, please reconsider!! I think more advertising about the show would have been more beneficial.

American Woman is the best show on television! Every single person I talk to about it LOVE it. The casting is genius, the attention to detail (for 70’s period decor) is on point, and the issues that are confronted are illuminating. An hour show would be great!