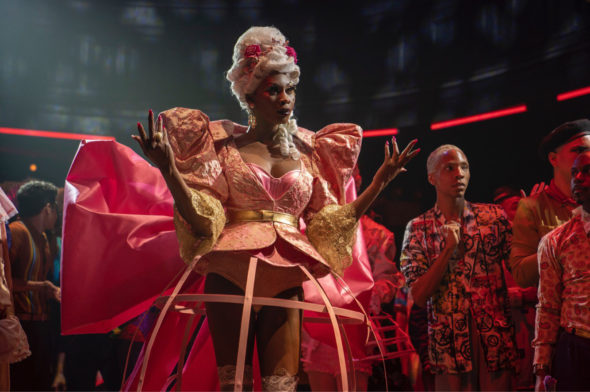 Read more info from FX about the renewal below:

“Pose has elevated our culture and the TV landscape like few shows before it, and we are honored to partner with co-creators Ryan Murphy, Brad Falchuk and Steven Canals on a third season,” said Landgraf. “Our thanks to the entire creative team, including Nina Jacobson, Brad Simpson, Alexis Martin Woodall, Sherry Marsh, Janet Mock, Our Lady J, Erica Kay, the amazing cast and crew and everyone at Fox 21 Television Studios and FX Productions for this incredibly entertaining, enlightening and groundbreaking series.”

The series, which Entertainment Weekly called “truly revolutionary,” has once again bucked trends and norms by topping its series debut. Pose joins the illustrious company of American Horror Story, Sons of Anarchy, Nip/Tuck and The Shield as FX drama series that outperformed their series premiere telecast.

Pose returns tomorrow night, Tuesday, June 18th at 10 p.m. ET/PT on FX with episode 2, “Worth It.” Determined to be an example to her children, Blanca launches a business venture with unexpected results. Meanwhile, Ricky’s travels have unpredicted consequences for his relationship with Damon, and Elektra shocks the ballroom community with a bold move. Written by Janet Mock; Directed by Gwyneth Horder-Payton.

The first season of Pose was named an AFI TV Program of the Year, and it won a Peabody Award, a Television Academy Honors Award and it earned two Golden Globe(R) nominations and a Writers Guild of America nomination.

Pose is a drama spotlighting the legends, icons and ferocious house mothers of New York’s underground ball culture, a movement that first gained notice in the late 1980s.

Mj Rodriguez stars as “Blanca Rodriguez,” who breaks from the House of Abundance and her former house mother “Elektra” (Dominique Jackson) to form her own “house,” a self-selected family that provides support to LGBTQ youth rejected by their birth families. Indya Moore plays “Angel,” a streetwalker with modeling aspirations. Ryan Jamaal Swain plays “Damon Richards,” a dancer who joins Blanca’s house. Together they compete in the Balls – where house members challenge each other in various categories and are judged on their outfits, attitude, or dance skills – under the watchful eye of Billy Porter as “Pray Tell,” Grandfather to all the children who compete in the house balls.

What do you think? Have you seen Pose? Are you glad it’s returning for a third season?

Looooove the show and all the fabulous, talented artists!!! Can’t wait for season 3! When does it start? I have to record the show in case I missed something! KEEP IT SHOWING PLEASE!! A VERY INSPIRATIONAL EXPERIENCE!!

So glad to hear that there will be a season three of Pose! Great show!

I am so glad to hear the good news Pose is returning a third season. Avis & Dorean were friends of mine in the 70’s. LOVE the cast and show.

I LOOOOOVE POSE & I AM ABSOLUTELY ECSTATIC that it is coming back for season 3 even though it’s a year away!!! Looking forward to watching the last 2 episodes!! 2 more than last season!! Maybe season 3 can give us 12 episodes!! Love you all!!! You’ve done an amazing job!!!

As a straight woman with a beautiful gay son this show is an amazing, awesome, brilliant series!!!!! I fell in love with all the cast! Especially Blanca and Electra who demonstrated to all women what it mean to be a REAL MOTHER! I was elated to discover there will be a 3rd season! I’m so excited! The 2nd season finale had me emotionally crying the entire time! I hope the entire cast returns I’m sure to watch!