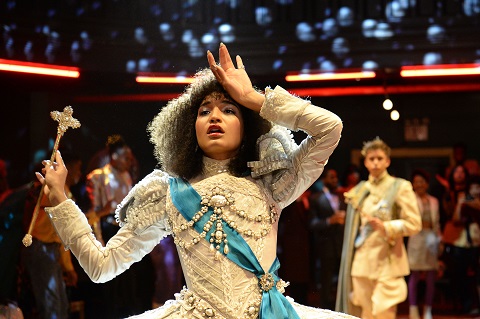 FX is getting its groove on. Recently, the network announced they’ve ordered a new TV show from Ryan Murphy called Pose.

Set in the 1980s, the dance musical and “looks at the juxtaposition of several segments of life and society in New York: the rise of the luxury Trump-era universe, the downtown social and literary scene and the ball culture world.” Notably, Pose will feature the largest cast of transgender and LGBT actors for a scripted TV series.

Read more info from FX below:

The history-making Pose will feature the largest cast of transgender actors in series regular roles and the largest recurring LGBTQ cast ever for a scripted television series.

Murphy said, “I am thrilled to join forces with John Landgraf and FX Networks and FXP and Dana Walden, Gary Newman and Fox 21 Television Studios to present what I think is a game changer of a show, which at its heart is an uplifting series about the universal quest for identity, family and respect. Along with being a dance musical and an affirming look at American life in the 1980s, I’m so proud that Pose and FX has made history right from the beginning by featuring the most trans series regular actors ever in an American television production. Additionally, the first season Pose will feature 50-plus LGBTQ characters – a record in American television history. I can’t wait for people to see this incredibly talented, passionate cast.”

Set in the 1980s, Pose looks at the juxtaposition of several segments of life and society in New York: the rise of the luxury Trump-era universe, the downtown social and literary scene and the ball culture world.

“In the 15 years we’ve worked with Ryan, he has demonstrated time and again that every person’s story is joyful, illuminating, and must to be told,” said Landgraf. “With Pose, Ryan, and his producing partners Nina Jacobson, Brad Simpson, Brad Falchuk and Steven Canals, introduce us to a new group of characters whose talent, life force, and self-made community is greater than the daunting obstacles created by a society that can be threatened by their native identities.”

FX has ordered eight episodes for season one of Pose, which is scheduled to begin production in February in New York and premiere on FX in the summer of 2018.

“A decade ago, Ryan brought us the groundbreaking pilot script for Glee, a show that celebrated underdogs, proudly showcased a completely diverse cast of unknown actors and led the way for new norms of inclusion and diversity on television,” commented FTG Chairman and CEOs Dana Walden and Gary Newman. “In Pose, Ryan has again, with his gifted collaborators, placed a spotlight on people who have been marginalized in society, bringing together emotional stories and a hugely talented cast in an inspirational series.”

In conjunction with Ryan Murphy’s Half Initiative, the series will be bringing on emerging transgender directors to be mentored through his Directing Mentorship Program.”