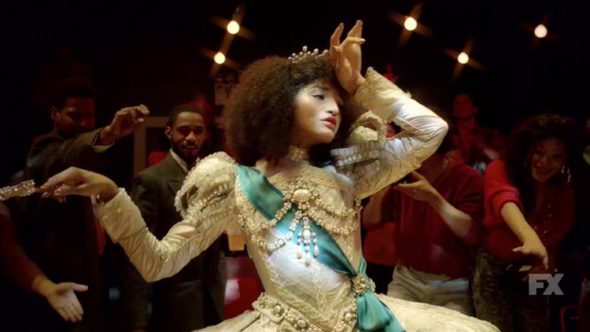 The beat goes on for the Pose TV show on FX. Referred to as a “dance musical” series, Pose features the largest cast of transgender actors in series regular roles and the largest number of LGBTQ actors in a scripted series.

In the Live+Same Day ratings, the six episodes that have aired thus far have averaged a 0.24 rating in the 18-49 demographic with 615,000 viewers.

Here are portions of the press release regarding the second season renewal:

LOS ANGELES, July 12, 2018 – FX has renewed the groundbreaking dance musical series Pose, it was announced today by John Landgraf, CEO of FX Networks and FX Productions. The second season of Pose will debut in 2019 on FX.

“Ryan Murphy has once again revolutionized television with Pose, an incredibly engaging story of creativity, courage, compassion, love and family at a pivotal time in our culture,” said Landgraf. “As television critics have universally acknowledged, there is simply nothing like Pose on TV, so effortlessly excelling on every creative level and earning a place in television history for its infectiously inclusive spirit. We are honored to partner with our producers Ryan, Brad Falchuk, Steven Canals, Nina Jacobson, Brad Simpson, Alexis Martin Woodall and Sherry Marsh, and the incredible cast and crew to continue this groundbreaking journey that is Pose.”

“Ryan Murphy and his talented collaborators Brad Falchuk, Nina Jacobson, Brad Simpson, Alexis Martin Woodall and Sherry Marsh have truly outdone themselves with this triumphant show that is as universal in its themes of love and family as it is specific and important and one of a kind,” commented Fox Television Group Chairmen and CEO’s Dana Walden and Gary Newman. “We are so proud of what they’ve achieved and grateful to John and FX for their steadfast belief in the series.”

Pose returns Sunday with the seventh and penultimate episode of its first season: “Pink Slip” (July 15, 9 PM ET/PT on FX) – Blanca makes a startling revelation about Lil Papi that changes the House of Evangelista forever. Meanwhile, Elektra rethinks her means of survival when the House of Abundance is evicted from their apartment. Written by Steven Canals, Our Lady J; directed by Tina Mabry.

Set in the 1980s, Pose is a dance musical that explores the juxtaposition of several segments of life and society in New York: the ball culture world, the rise of the luxury Trump-era universe and the downtown social and literary scene.

Evan Peters and Kate Mara play New Jersey couple “Stan Bowes” and “Patty Bowes,” who get sucked into the glamour and intrigue of New York City in the 1980s, as epitomized by “Matt Bromley” (James Van Der Beek), Stan’s boss. Mj Rodriguez stars as “Blanca Rodriguez,” who breaks from the House of Abundance and her former house mother “Elektra Abundance” (Dominique Jackson) to form her own “house,” a self-selected family that provides support to LGBTQ youth rejected by their birth families. Indya Moore plays “Angel,” a streetwalker who develops feelings for her new client, Stan. Ryan Jamaal Swain plays “Damon Richards,” a dancer who joins Blanca’s house. Together they compete in the Balls – where house members challenge each other in various categories and are judged on their outfits, attitude, or dance skills. Under the watchful eye of “Pray Tell” (Billy Porter), Grandfather to all the children who compete in the house balls, Elektra’s House of Abundance and Blanca’s upstart House of Evangelista face off in what may develop into a legendary rivalry.

About FX
FX is the flagship general entertainment basic cable channel of FX Networks, a business unit of 21st Century Fox. Launched in June of 1994, FX is carried in 89 million homes. The diverse schedule features a growing roster of critically-acclaimed and award-winning hit dramas series, including Taboo, Legion, Snowfall, Trust and the upcoming Mayans M.C. and Mr Inbetween; the critically-acclaimed limited series American Horror Story, Fargo, American Crime Story and FEUD; acclaimed hit comedy series including Atlanta, Baskets and Better Things, and the upcoming What We Do in the Shadows; the dance musical series Pose, and the upcoming docuseries The Weekly with The New York Times. FX is the former home of the critically-acclaimed and award-winning hit drama series The Shield, Nip/Tuck, Rescue Me, Damages, Sons of Anarchy, Justified and The Americans. The network’s library of acquired box-office hit movies is unmatched by any ad-supported television network.

What do you think? Do you enjoy watching the Pose TV show? Do you plan on watching the second season in 2019?

I love the TV series Pose it very well put together and thanks for the second season, I will be watching.

I cannot wait for the next season! DO NOT CANCEL IT! We need this kind of representation and information out there. Love it!

I love the series, and wish there could be more like it.

I think this show is wonderful, my neighbors and I love this show so please don’t cancel it but when is it coming back on

My hubby and I thought it was so very informative, and entertaining, it also made us understand the other side of the mountains! We so enjoyed the movie, “Too Wong Foo” with Patrick Swayze and Wesley Snipes and John Deguizmo! We look forward to Season 2. Wish it would be sooner than 2019! I noticed that they removed the series from on demand? Are they going to continue showing season 1? There was some of it that we missed!

Pose is one of the greatest nighttime dramas since the early 80’s dramas. myself I gave it a hundred rotten tomatos .

Pose is awesome. Wonderful acting and interesting plot. Please keep it going. Do not cancel. Love it!!

I love this show. It is awesome. The writers and the actors are fabulous. I can’t wait to next season. This show deserves an award. I laughed sometimes and wanted to cry sometimes.

I actually stumble soon this show and the picture first caught my eye and I was like this looks interesting. After the first show I was HOOKED!! It made me sad the season was short. But it left me wanting more. I CAN’T WAIT FOR SEASON TWO!!!!!