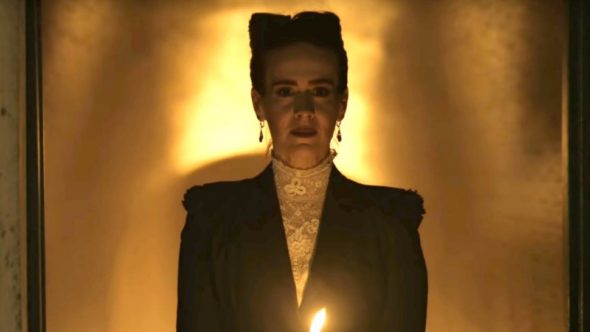 How long with Ryan Murphy and Brad Falchuk horrify fans? Has the American Horror Story TV show been cancelled or renewed for a ninth season on FX? The television vulture is watching all the latest cancellation and renewal news, so this page is the place to track the status of American Horror Story season nine. Bookmark it, or subscribe for the latest updates. Remember, the television vulture is watching your shows. Are you?

There’s no need to worry whether the American Horror Story TV show will be cancelled or renewed for season nine. At Ryan Murphy’s request, FX already renewed it through season 10, back in August. The cable network previously picked up season nine in 2017. Now we’re left to wonder whether the series will end with the tenth installment.

Early in 2018, Murphy signed a big overall deal with Netflix, so he may want to wrap up this successful series, or maybe he just wants to know where to take it next. The ratings have dropped over the years, so flying blind, I think season 10 could well be the end, but that’s really just a guess. For now, I’ll keep an eye on the Nielsens and update this page with breaking developments. Subscribe for free American Horror Story cancellation, renewal, and news alerts.

What do you think? Do plan to watch the ninth and tenth seasons of the American Horror Story TV show? How would you feel if FX cancelled this TV series, instead? When do you think the anthology should end?