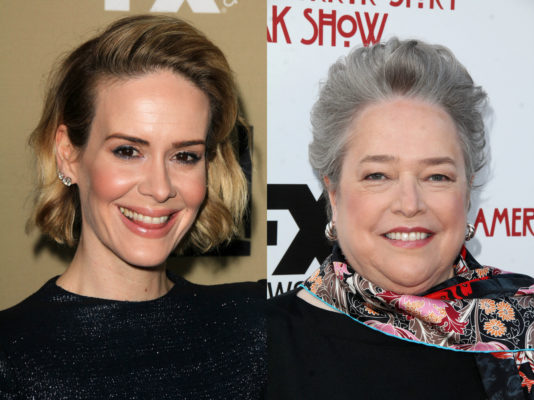 Some familiar faces are returning to American Horror Story. According to The Hollywood Reporter, Sarah Paulson, Kathy Bates, and Evan Peters will star in the FX TV show’s eighth season.

Paulson and Peters have both appeared in the past seven seasons of the anthology drama. Bates joined American Horror Story during its third season, Coven, and has since starred in seasons four, five, and six.

While few details about the new season of American Horror Story have been released, co-creator Ryan Murphy says it will take place in the near future. FX has not yet announced a premiere date for season eight.

What do you think? Are you a fan of American Horror Story? Will you watch season eight?

Well speaking for myself, I think Asylum was by far the best one. And Cult was by far the worst. But I also enjoyed Coven, and I think Roanoke was really good too. But Freakshow, Hotel, and Cult were awful. And yes ok, Sarah Paulson and Kathy Bates are cool. But I would much rather see Lily Rabb return. When she played that Nun in Asylum and raped that Priest, I thought I was going to lose my mind lol. Yes, please bring Lily Rabb back.

I hope this season will be better than Cult. I’ve enjoyed most of the seasons, Cult has been the worst so far. The season with the fake reality show wasn’t that great either.

So glad Kathy is back on American Horror Story. Disjointed was a waste of her talent.