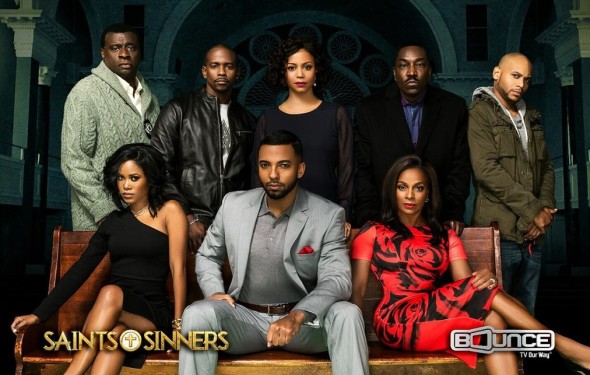 ATLANTA, March 20, 2018 — The much-anticipated third season of the hit drama series Saints & Sinners will debut on Bounce on Sunday, April 8, with new episodes premiering every Sunday night at 9:00 p.m. (ET/PT) through the season finale on May 27.

And all hell breaks loose in season three.

Bounce will air binge-viewing marathons of Saints & Sinners season one on Saturday, April 7 and season two on Sunday, April 8 with both marathons starting at 1:00 p.m. ET. Season one and two episodes of Saints & Sinners are available anytime at Brown Sugar, Bounce’s new subscription video-on-demand service which is accessible on Amazon Channels, Amazon Fire TV, Amazon Kindle, Apple TV, Roku, Android and Apple smartphones and tablets and web browsers via BrownSugar.com.

The second season of Saints & Sinners was seen by nearly 8.4 million unduplicated viewers and 5.7 million households across all airings on Bounce. Saints & Sinners is produced in partnership with Swirl Films.”

What do you think? Have you seen Saints & Sinners? Will you watch the new season?

Please run the Saints and Sinners Marathon again during this coming Christmas holiday. Please run it from Season One through the finale. I want to know the history. Unfortunately, I started watching in the middle this weekend on Bounce tv during a weekend Marathon. Thank you!

I enjoyed this program, both seasons and look forward to the next seasons.

Please bring back Saints and Sinners. Last season i waited and I’m waiting again. We don’t get much on TV these days unless you have cable. I don’t have cable and I count on good TV series and Saints and Sinners rate at the top of my list. Thank you

When is the next showing of Saints and Sinners?

Dauhlleen Cooper hello,I am a fan of the show Saints and Sinners but you network is not showing in my area in North Arlington NJ it was last showed a week ago now all I get on the Bounce channel is repeated airings of shows that don’t even match the tv guide listing right now it reads All in the family but what is being shown is Living Single this had been going on since last week plz fix the issue thank you