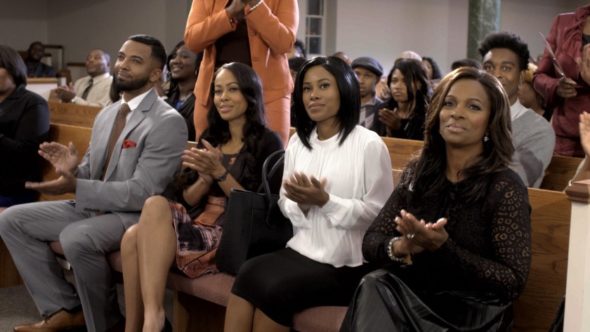 There will be lots more drama at a certain Baptist church in a small-ish Georgia town. Bounce TV has renewed the Saints & Sinners TV show for a fifth season. In addition, the cable channel has ordered a standalone movie.

Bounce announced the fifth season renewal earlier today and noted that it would debut sometime in Spring 2021. All previous seasons have had eight episodes apiece and season four finished airing in August 2019. In season five, viewers will find Mayor Ella Johnson (Calloway) bracing for the ride of her life when a father comes to town seeking revenge for his son’s murder. A long-kept secret will be revealed that threatens to take down the entire town.

Before season five begins, the cable channel plans to air a standalone movie. That will be released in the first quarter of 2021. No further details have been announced thus far.

What do you think? Do you like the Saints & Sinners TV show? Will you be tuning in for the fifth season? Are you looking forward to the movie on Bounce TV?

I love this show!! I just binged the 4 seasons on Hulu! And I definitely will be watching the 5 th season!

What in the world! When will this show return. You give me a little bit then quit. I want to see more. We in the carolinas are waiting.

Great entertainment- I love it! Love the cast as well!

The return of Saints and Sinners wasn’t anything as I expected..the show was absolutely horrible..your writers need to rewrite these episodes because personally, I do t want to see another season of lady bird (in lower case)..

I love this show and so glad it has not been cancelled. Can’t wait to see the movie. Love the actors and actresses. Also can’t wait until season 5. GREAT SHOW!