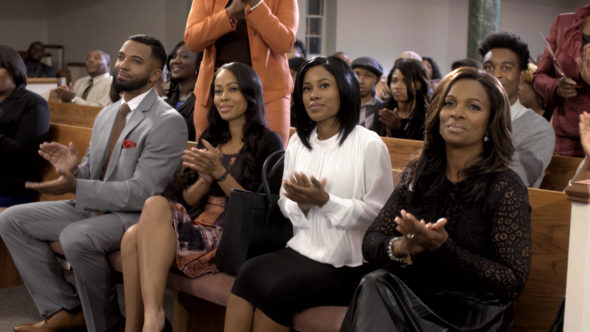 ATLANTA (April 11, 2019) – Bounce is turning up the heat on Sunday nights this spring and summer.

What do you think? Have you seen Saints & Sinners? Will you watch the new season?

I LOVE SAINTS AND SINNERS!!!!!!!!!I AM SO APPRECATIVE HOW JABARRI IS ACTUALLY GOING LEGIT….HE AND FAITH MAKE THIS SHOW VERY WORTH WATCHING. REX N ELLA ARE DEFINITELY REALIZING THEY ARE NO GOOD FOR EACH OTHER. ELLA NEEDS TO GET HERS!!!! AND THAT CRAZY CHIC ANGELIA. FAITH NEEDS GET SUM GET BACK ON THAT HOSPITAL N ANGELIA# WAITING ON4

I want to see saints and sinners please!

So sad that it’s cancelled.

Is you crazy that is a good show i really enjoy it. I can look at that every night thank you

So tru….I check for the next season EVERY MARCH!!!!!

Where is Christian Keyes character ??? Levi Sterling. This is the main reason why I watch the show, to see him . So can You please answer this question for me???

I love the new season but it was way to soon to kill off Detective Noah. There seems to be history between Tam and Malik. Rex and Lady Ella are well over due to be exposed it’s obvious she’s using him.